Throughout her confirmation process, Ms Craft struggled to allay Democrats' concerns about her family's significant investments in the fossil fuel industry, separating herself from the President by stating during her confirmation hearing last month that "human behaviour has contributed to the change in climate".

She also pushed back against their accusations that she had spent too much time away from her post in Ottawa, arguing that her travel throughout Canada and elsewhere had been approved, and many of her trips were to negotiate and promote Mr Trump's new North American trade deal.

Eight other Democrats, including the seven participating in this week's 2020 presidential primary debates in Detroit, missed the vote, along with two Republicans.

The vote to confirm Ms Craft reflects far deeper partisan divisions over her appointment than existed in the Senate for Ms Haley, who was confirmed to the same post in January 2017 by a vote of 96 to four. 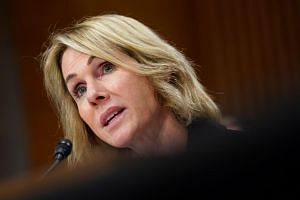 In the hours before the vote, Senate Foreign Relations Committee ranking member Robert Menendez, a New Jersey Democrat, put out a report on Ms Craft stating that her "qualifications fall short: she does not have the knowledge, skills, qualifications, or experience to successfully lead the United States' efforts at the United Nations".

The complaints in the Democratic-drafted report mirrored many of the issues over which Ms Craft and Democrats clashed during his confirmation hearing last month.

Among them are that Ms Craft "displayed a lack of depth on basic foreign policy issues", such as the two-state solution for Israel and the Palestinian territories, during that hearing, and that "she merely repeated talking points" on developing crises such as Iran.

The Democrats' report also repeated concerns about Ms Craft's travel while ambassador to Canada, pointing out that she spent about seven months of her two-year stint in Kentucky or Oklahoma, where she and her husband have homes.

They also complained that she did not seem to have a full understanding of her husband's investments, and said her promise to recuse herself from negotiations and meetings related to coal, but only look into doing the same for fossil fuels, was unsatisfactory.

Spokesmen for the State Department and National Security Council did not respond to a request for comment on Wednesday afternoon.

Generally speaking, Ms Craft is expected to uphold most of the policy positions Mr Trump has espoused, even when it puts her into conflict with senators, Republican or Democrat.

During her confirmation hearing, she defended Mr Trump's decision to reduce payments to the UN and pull out of bodies like the UN Human Rights Council, stating that the international organisation's "ambitions at times have gotten ahead of accountability. Waste and overlap remain problems".

She also promised that she would respect the findings of the UN's investigation into Saudi crown prince Mohammed bin Salman's responsibility for the murder of Saudi journalist Jamal Khashoggi in a consulate in Istanbul.