As their attempts to head off a new and deeper round of US tariffs on Chinese imports seem unsuccessful, industry groups in the United States are bracing themselves for a grim winter, with American consumers likely to bear the brunt of higher prices as the festive season approaches.

The period for public comment on the ramifications of tariffs on China ended on Thursday, and the Trump administration's plan to impose tariffs on US$200 billion (S$275 billion) worth of Chinese imports, from cameras to bicycles to baseball gloves, could kick in soon, with the President showing little sign of relenting.

China, which retaliated against initial tariffs in July and last month, has said it will hit back against a new round with duties on another US$60 billion worth of American goods.

There has been no announcement yet of fresh US tariffs, which could range from 10 per cent to as much as 25 per cent, and come any time.

Fears of a fresh round saw global markets take a beating over the past week, and most Asian markets fell as they ended the week. Asian shares hit a 14-month low.

Singapore shares ended the week at their lowest in 16 months, with the Straits Times Index down 0.4 per cent to 3,134.39.

Americans are concerned, too. In a joint letter to US Trade Representative Robert Lighthizer on Thursday, 152 trade associations representing farmers and agribusinesses, retailers and others wrote: "Continuing the tit-for-tat tariff escalation with China only serves to expand the harm to more US economic interests, including farmers, families, businesses and workers." 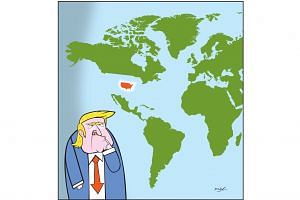 How important is America to global trade?

Four major technology companies - Dell, Cisco, Juniper Networks and Hewlett Packard Enterprise - also wrote to Mr Lighthizer asking to be exempted from new tariffs, saying a 10 per cent to 25 per cent additional duty on networking products and accessories "would cause broad, disproportionate economic harm to US interests... and broader US economic and strategic priorities".

Mr Trump had shown no sign of bending the previous day at a meeting with Republican congressional leaders, saying: "We have done very well in our negotiation with China, but we are not prepared to make the deal that they would like to make."

Analysts say China has only offered to reduce the US trade deficit by buying more from America - leaving unaddressed Mr Trump's wider strategic goal of forcing it to also open up its markets to US businesses, and review rules that see US firms in China forced to share technology with Chinese partners.

These have left China somewhat isolated, analysts say. But Beijing is prepared to wait at least until the outcome of America's midterm elections for Congress on Nov 6.

Mr Trump is gambling on the robust economy to take the edge off a trade war. The US economy added 201,000 jobs last month, and unemployment held steady at a low 3.9 per cent. Jobless claims, a proxy for layoffs, also hit a 49-year low.

As for tariffs, White House economic adviser Larry Kudlow told CNBC that the US is still talking to China to resolve some issues. "(Our) asks have not been satisfied," he said. "However, hope springs eternal."

A version of this article appeared in the print edition of The Straits Times on September 08, 2018, with the headline 'Concerns in US, Asia over fresh round of tariffs'. Subscribe
Topics:
More
Whatsapp Linkedin FB Messenger Telegram Reddit WeChat Pinterest Print Purchase Article Copy permalink