If Mrs Hillary Clinton ends up winning the election, she won't be quite as left in governing as she has been in campaigning. She has always been a more centrist Democrat, originally supporting the Trans-Pacific Partnership (TPP) and supporting more hawkish defence policies.

For this election, she has had to move further left, talking about free college and stopping the oil pipeline in America.

Mr Donald Trump has been able to rally a more right sector of the country to be more vocal about conservative principles. When he talks about Hispanics and outsiders, it is fair as he is just expressing a very conservative perspective held by that segment.

However, America is a democracy, with checks and balances within the government. There is Congress, consisting of the House of Representatives and the Senate. So Mr Trump, with his statements, cannot do everything he says he's going to do. 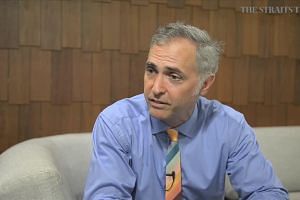 There is currently some very strong and unexpected flexing going on in Asia. Philippine President Rodrigo Duterte made some very extreme remarks about removing US soldiers from the country, after visiting China last week.

Regardless of who the US president is, there is a big push to change up the power base in Asia. I don't think it's going to come to a war, but there is going to be some significant posturing, as an example, a US ship not being allowed to dock in Hong Kong.

There has also been a strong push with certain allies in Asean these last three years, especially in the last 18 months, to solidify the relationships.

The US and Vietnam have agreed to the sale of military hardware and aircraft for the first time, while Vietnam has secured many caveats within the TPP agreement structure, spearheaded by the US, to seal the programme. The US is also in sync with Vietnam and Indonesia, about things going on in the South China Sea.

Singapore and the US are very close partners, not just in trade, but in defence, trust and lifestyle, too.

All this drama has nothing to do with who is the president of the United States, and I don't think it's going to go away in the short term. If Mrs Clinton becomes president, she will be more hawkish on Asia.

Neither she nor Mr Trump will tolerate what is going on.

So the question will be, who is more respected by leaders in Asia?