Mrs Clinton's lead has varied from 4 to 7 percentage points every day over the past week in the Reuters/Ipsos poll, while other opinion polls have shown the race becoming increasingly competitive. Real Clear Politics, which averages together most national polls, estimates that Mrs Clinton's lead has dropped from 5 points at the end of last week to less than 2 points on Friday.

This is similar to 2012, when the Reuters/Ipsos tracking poll showed President Barack Obama with a 3 to 7 point advantage over Republican challenger Mitt Romney in the final days of the campaign while Real Clear Politics showed Mr Obama's lead nearly vanishing ahead of the election. Mr Obama was re-elected with a 4-point advantage in the popular vote.

Mrs Clinton, despite her national lead, appears to have lost ground in a number of states, according to a separate polling effort that takes a more granular look at the race. 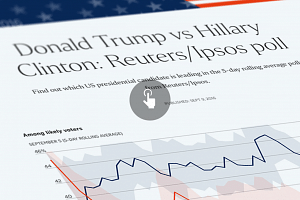 The Reuters/Ipsos States of the Nation project shows races in Florida, North Carolina and Michigan have tilted away from Mrs Clinton over the past week and are now considered too close to call. These swing states are hotly contested because their voters can swing either to Republicans or Democrats and can be decisive in presidential elections.

The project estimates that Mrs Clinton still has a 90 per cent chance of winning the election, however.

Some of this appears to be tied to Federal Bureau of Investigation Director James Comey telling US lawmakers on October 28 that his agency was investigating a new trove of e-mails as part of a probe into Mrs Clinton's handling of classified information while serving as US secretary of state.

While Mr Comey said the e-mails might not be significant to the investigation, Mr Trump and Republican leaders have seized on the news, calling it evidence that Mrs Clinton is unfit for the White House.

Since the FBI announcement, the Reuters/Ipsos poll has seen a surge in Republican expectations. More than half of Republicans now say they think Mr Trump will win the election - up from a low point last week when Republicans were more likely to think Mrs Clinton would win.

The Reuters/Ipsos national tracking poll was conducted online in English in all 50 states. It includes 2,021 people who were considered to be likely voters from their voting history, registration status and stated intention to participate in the election. It has a credibility interval, a measure of accuracy, of 3 percentage points.