Both sides unlikely to meet to defuse tensions till after November mid-term polls, sources say

WASHINGTON • China has scrapped trade talks with the United States days before US President Donald Trump is set to escalate the commercial battle with a new round of tariffs, with people familiar with the situation saying the two sides are unlikely to sit down to defuse spiralling trade tensions until after November's mid-term elections.

The cancellation came as Mr Trump threatened to escalate his tariff war if Beijing dares to impose tit-for-tat measures in response to Washington's latest package of levies on US$200 billion (S$273 billion) of Chinese exports, saying the US has "more bullets".

A mid-level delegation from China had been due to travel to the US capital to pave the way for a trip by Vice-Premier Liu He, the country's top-ranking economic official, to hold talks with US Treasury Secretary Steven Mnuchin this week.

The efforts to defuse the escalating trade spat crumbled a week after Mr Trump tweeted that the White House felt "no pressure" to resolve the dispute with China.

The US President has cautioned the world's second-largest economy to think twice before engaging in a trade war with the largest.

"We're going to go US$200 billion at 25 per cent on Chinese-made goods. And we will come back with more if they retaliate. We have a lot more to come back with," he told a packed rally in Missouri for Republican Senate candidate Josh Hawley last Friday.

"We are cracking down on the unfair trade practices of China. We have rebuilt China. We have given them such wealth. And we are changing it," Mr Trump told the cheering crowd.

"So we charged 25 per cent on US$50 billion worth of merchandise tariffs coming in. And then they said, 'We're going to do the same thing.' And I've said, 'That is okay. We have far more bullets.' "

He had earlier warned of duties on a further US$267 billion of made-in-China goods, which would cover all of China's exports to the US.

In addition to new tariffs, US State Department sanctions against China's defence agency and its director last Thursday contributed to the ultimate decision to cancel the talks, according to people familiar with the matter.

A senior White House official said last Friday that the US is optimistic about finding a way forward in its trade dispute with China, but it does not have a date scheduled for further talks.

The official said that despite its protestations, China was well aware of US demands that it halt what Washington considers unfair trade practices.

Mr Trump has made clear his resolve on the issue, the official said, and the two sides remain in touch. 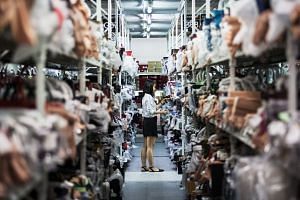 WTO to review China bid for trade sanctions on US

"We have been very clear in all of these meetings about what is... required," the official said.

Chinese President Xi Jinping faces public pressure to stand undaunted by Mr Trump's financial swings at his country, analysts say, as he seeks to prove that China, too, is a superpower on the world stage.

Beijing's next round of tariffs, slated to take effect tomorrow at noon, targets more than 5,200 kinds of American imports.