SINGAPORE (REUTERS, BLOOMBERG) - Iran’s foreign minister said on Friday (Aug 3) China was “pivotal” to salvaging a multilateral nuclear agreement for the Middle Eastern country after the United States pulled out of the pact earlier this year.

US President Donald Trump pulled out of the 2015 deal in May. International sanctions were lifted under the pact between world powers and Teheran in return for curbs on Iran’s nuclear programme. The other partners in the agreement, including the UK, France, Germany and Russia, criticised the US move to quit the deal.

Trump has ordered US sanctions on Teheran, while a senior State Department official said Washington has told allies to cut imports of Iranian oil by November, warning that even allies would face sanctions if they didn't show "significant" progress in reducing Iranian oil purchases by Nov 4.

Iran and other signatories, including China, have been trying to salvage the deal.

“The role of China in the implementation of JCPOA, in achieving JCPOA, and now in sustaining JCPOA, will be pivotal,” Mohammad Javad Zarif said, referring to the technical name for the nuclear deal.

Meanwhile in Houston, two officials familiar with US-China negotiations said the US has been unable to persuade China to cut Iranian oil imports, dealing a blow to Trump's efforts to isolate the Islamic Republic after his withdrawal from the 2015 nuclear accord.

Beijing has, however, agreed not to ramp up purchases of Iranian crude, according to the officials, who asked not to be identified because discussions with China and other countries continue.

That would ease concerns that China would work to undermine US efforts to isolate Iran by purchasing excess oil.

While the Trump administration has said it wants to cut Iranian oil exports to zero by Nov 4, most analysts viewed that target as unlikely. 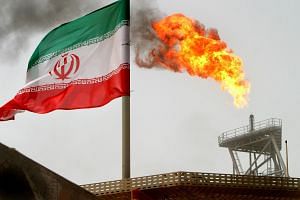 Iran is seen readying major exercise as tensions with US simmer

Mr Francis Fannon, the assistant secretary of state for the Bureau of Energy Resources, was recently in China to discuss sanctions, according to a State Department spokesperson.

The Trump administration argued that the nuclear deal, which lifted some economic sanctions in exchange for restrictions on Teheran's nuclear programme, was fatally flawed because it didn't address the country's destabilising behaviour or limit its development of ballistic missiles, among other things.

The oil market has been speculating about how much of Iran's exports could be eroded by the US sanctions, with analysts from BMI Research to Mizuho Securities predicting that China might boost its imports of cheap supplies from the state and offset cuts by other nations.

Countries including South Korea and Japan are reducing purchases from Opec's third-largest producer before the deadline to avoid the risk of buyers losing access to the US financial system.

China - the world's top crude buyer and Iran's No. 1 customer - has said previously that it opposed unilateral sanctions and lifted monthly oil imports from the country by 26 per cent in July. It accounted for 35 per cent the Iranian exports last month, according to ship-tracking data compiled by Bloomberg.

The Organisation of Petroleum Exporting Countries, led by Saudi Arabia, has pledged to fill any supply gaps in the market after Mr Trump's complaints.

That's helped limit a rally in global benchmark Brent crude, which is trading near US$73 (S$99.94) a barrel after falling 6.5 per cent last month.

The London marker is still up about 40 per cent from a year earlier.