WASHINGTON • President Donald Trump risks a furious political backlash if he agrees to soften US penalties for Chinese telecommunications giant Huawei to speed up trade talks with China, according to former administration officials and trade analysts.

Chinese President Xi Jinping is expected to ask Mr Trump to lift a ban on US companies selling components to Huawei when the two leaders meet at the Group of 20 (G-20) summit in Japan today.

Prominent lawmakers, including Republican Senators Marco Rubio of Florida and Mitt Romney of Utah, and Democratic Senator Mark Warner of Virginia, have warned Mr Trump not to ease up on Huawei, which the President had earlier described as "very dangerous" to US security.

Senate Minority leader Charles Schumer, a Democrat, had warned the President: "Stay tough. Do not give in. Make sure Huawei can't come to the United States, and we cannot supply it."

The Commerce Department last month placed Huawei on its "entity list", which requires US companies to obtain a government licence before supplying the Chinese firm.

Administration officials say the Chinese government could exploit Huawei equipment to spy on or disrupt US communications networks. 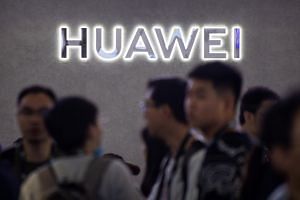 Mr Trump then said that he might make a package deal with Mr Xi that would address trade issues and the fate of the Chinese company, which reported almost US$105 billion (S$142 billion) in sales last year.

Dr Derek Scissors, a China expert at the American Enterprise Institute, said the only question is what price Mr Trump exacts in return for conceding on Huawei. The President prioritises reducing the US trade deficit more than potential vulnerabilities in American networks, he said.

But mounting congressional concern about China could turn a Huawei case into a revolt, the occasional administration adviser said.

Mr David Hanke, a former Republican aide on the Senate Intelligence Committee and now a partner at Arent Fox, added: "There's going to be bipartisan anger."

For hawks, Mr Trump's recent Huawei remarks recalled his handling last year of ZTE, another Chinese telecommunications company that the Commerce Department had blacklisted. After Mr Xi complained about the potential loss of Chinese jobs, the President agreed to lift the ban in return for ZTE paying a US$1 billion fine.

An analysis of Huawei products released on Wednesday found that more than half had serious security flaws that would allow access to unauthorised users.

Finite State, an Ohio cyber security firm said: "In virtually all categories we examined, Huawei devices were found to be less secure than those from other vendors making similar devices."

Huawei has denied allegations that it represents a danger to US security.

A version of this article appeared in the print edition of The Straits Times on June 29, 2019, with the headline 'China hawks in US fear Trump is ready to deal on Huawei'. Subscribe
Topics:
More
Whatsapp Linkedin FB Messenger Telegram Reddit WeChat Pinterest Print Purchase Article Copy permalink