WASHINGTON - US Trade Representative Robert Lighthizer on Monday (Sept 18) zeroed in on China, calling it an unprecedented threat to the world trading system.

And asked about Asia, he said the US prefers bilateral agreements based on the assumption that with a US$ 18 trillion economy ($24.3 trillion) it can do a better job negotiating and enforcing bilateral rather than multilateral trade agreements.

"The policy will be to engage countries (in Asia) in bilateral agreements; we have to determine when we're going to do it and what the order will be," Mr Lighthizer, a trade hawk, told an audience at the Centre for Strategic and International Studies (CSIS) in Washington, DC.

He had blunt words for China, saying: "The sheer scale of (China's) coordinated efforts to develop their economy, to subsidise, to create national champions, to force technology transfer and to distort markets in China and throughout the word is a threat to the world trading system that is unprecedented."

The World Trade Organisation (WTO) was not equipped to deal with this problem, he said.

"The WTO and its predecessor the General Agreement on Tariffs and Trade were not designed to successfully manage mercantilism on this scale," he maintained. "We must find other ways to defend our companies, workers, farmers and indeed our economic system. We must find new ways to ensure that a market-based economy prevails."

The US was studying its trade agreements to determine whether they were working to its benefit, he said.

"The basic notion of a free trade agreement is one grants preferential treatment to a trading partner in return for an approximately equal amount of preferential treatment in their market," he said. "It is reasonable to ask after a period of time whether what we received and what we paid were roughly equivalent. One measure of that is change in trade deficits. Where the numbers and other factors indicate disequilibrium, one should renegotiate." 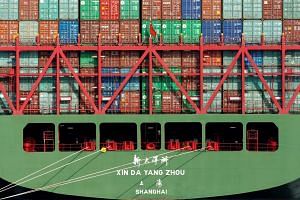 Data set to show China's widening trade surplus with US

There was broad support in the American electorate on this, he insisted. Citing not only President Donald Trump's position but that of erstwhile Democratic Party primary candidate Senator Bernie Sanders and the party's eventual candidate Hillary Clinton, he said "No on really ran on maintaining the status quo on trade. We have a different philosophy and there will be change."

"I believe we must be pro active," he said. "The years of talking about these problems have not worked and we must use all the instruments we have to make it expensive to engage in non economic behaviour and to convince our trading partners to treat our workers, farmers and ranchers fairly. So, expect change expect new approaches, expect action."

One of President Trump's first actions was to withdraw the US from the 12-nation Trans Pacific Partnership (TPP), a massive trade agreement with several economies in Asia including Singapore; and to renegotiate the North American Free Trade Agreement (Nafta) which binds the US, Mexico and Canada.

Nafta re-negotiations are now ongoing. And Mr Trump in April also ordered a study of trade with 16 economies to determine what action should be taken to rectify unacceptable deficits.

The list is topped by China with which the US has a US$347 billion trade deficit. It is followed by Japan, Germany, Mexico, Ireland, Vietnam, Italy, South Korea, Malaysia, India, Thailand, France, Switzerland, Taiwan, Indonesia and Canada.