The violent encounter sparked intense demonstrations across the city after a video recording of it was released showing Van Dyke firing 16 shots at McDonald.

The closely-watched trial here again highlighted the fraught relationship between this city's police force and its residents, particularly people of colour, as well as questions here and nationwide surrounding how officers use deadly force.

Van Dyke - who was also found guilty on 16 charges of aggravated battery, one for each shot fired at McDonald - has said he feared for his life. His attorneys said that McDonald, 17, would be alive if he had dropped the weapon.

Prosecutors argued that McDonald's death was not justified and accused Van Dyke of "exaggerating the threat."

This verdict marks the latest in the seemingly endless string of shockwaves stemming from McDonald's death and the subsequent release of the video, which continues to reverberate across the the city and dominated the second term of Chicago Mayor Rahm Emanuel.

After the footage was released in November 2015, Emanuel ousted his police superintendent, Garry McCarthy, who later said he was a fall guy and is now running for mayor. Voters dismissed the prosecutor in the case, who waited a year to charge Van Dyke.

The Justice Department launched an investigation, concluding in a scathing report last year that the department violates the constitutional rights of residents. A week before Van Dyke's trial began, Emanuel announced he would not run for a third term.

This trial has drawn particular scrutiny because officers are rarely charged for fatally shooting people on duty. Convictions are even less likely to follow. 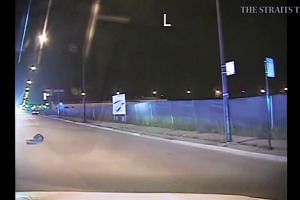 Officers have wide latitude under the law to use deadly force. In recent years, fatal shootings of civilians by police officers in Cincinnati; Milwaukee; North Charleston, South Carolina; and the Minneapolis area have spurred intense protests, resulted in charges and ended with the officers acquitted or the juries deadlocked.

McDonald's death in October 2014 - just weeks after a black teenager was killed by a white police officer in Ferguson, Missouri - did not draw nationwide attention until, 13 months later, the court-ordered release of the police dashcam video.

Authorities had initially said McDonald lunged at police officers, but the footage showed McDonald slowly walking down the middle of Pulaski Road before hitting the ground from Van Dyke's bullets.

After that video was released in November 2015 - on the same day Van Dyke was charged with first-degree murder - protesters marched throughout Emanuel's term in downtown Chicago streets. They gathered in front of the mayor's home, on Lake Shore Drive and even on two lanes of the Dan Ryan Expressway to call attention to police reform and what they charged was a cover-up from city hall.

City officials had fought releasing the tape in court and it was only released until after Emanuel safely won reelection to a second term and after Chicago's City Council approved a US$5 million (S$7 million) settlement with the McDonald family.

Last year, the city borrowed US$225 million on police-related settlements and judgments, bringing the total to US$709 million between 2010 and 2017, according to a report by the Action Centre on Race and the Economy. The organisation estimates that the borrowing will eventually cost Chicago taxpayers more than US$1 billion in interest for the life of the bonds.

Tensions surrounding the Van Dyke trial have been high. Protesters have gathered outside the George N. Leighton Criminal Courthouse every day of the three-week trial. Some high-rise owners in downtown Chicago have warned residents of potential violence following the verdict.

"If the court lets Van Dyke walk free, that would be illegitimate violence too - a threat against every black and brown youth in Chicago," they said.

Some activists have argued for peaceful protests in the form of an economic boycott.