American actor says he no longer wants to be blackmailed; he was diagnosed 4 years ago

WASHINGTON • American actor Charlie Sheen, as well known for his off-screen debauchery with drugs, alcohol and prostitutes as his on-screen work, has disclosed that he is HIV positive.

Sheen, 50, told NBC's Today show he was diagnosed about four years ago and said the reason he disclosed the information was because he was being blackmailed.

"I am here to admit that I am in fact HIV positive," Sheen said yesterday, saying he was "not entirely sure" how he acquired the virus. 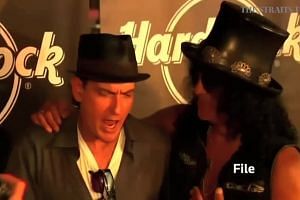 Charlie Sheen admits he is HIV positive: Other celebrities diagnosed with the infection

"It's a hard three letters to absorb," he added.

Sheen said that when he first started feeling sick, he had terrible migraines and so much sweating at night that it drenched his bed. It was so bad he thought he had brain tumour and was close to death.

At the time, he was the highest paid actor on US television with a reported salary of some US$1.8 million (S$2.6 million) per episode. (See correction note)

Asked whether he had transmitted HIV to anyone since his diagnosis, Sheen said "impossible".

The actor said he had "always led with condoms and honesty when it came to my condition".

One of the reasons he disclosed the news about his health, said Sheen, was to stop others from extorting money from him. He would not disclose how many people he was paying for their silence, but said the payments reached into the millions of dollars to people he once considered in his inner circle.

"What people forget is this is money, money they are taking from my children," Sheen said, referring to his five children and one grandchild. "I thought they could be helpful. Instead, my trust turned into their treason," Sheen said, adding he will no longer pay those people. "I think I released myself from this prison today."

He has five children from his marriages to model Donna Peele, actresses Denise Richards and Brooke Mueller, and other relationships.

Correction: An earlier version of this story said that Charlie Sheen had a reported annual salary of US$1.8m. The amount should be US$1.8m per episode instead. We are sorry for the error.