When World Health Organisation (WHO) director-general Tedros Adhanom Ghebreyesus was seven years old and living in Ethiopia, his younger brother died of a disease later suspected to be measles.

"I didn't accept it; I don't accept it even now," Dr Tedros, now 55 and married with five children, told Time magazine in a 2019 interview.

The childhood experience stayed with him and sharpened his sense of the unfairness of a world in which children could live or die based on the strength of their country's healthcare system, Time reported.

"Why do people die when we have the means?" said Dr Tedros, Ethiopia's former health minister and foreign affairs minister. "That motivates me."

Today, he spearheads the world's response to the coronavirus outbreak that has infected more than 107,000 people across six of the world's seven continents and killed over 3,600.

As part of his job, he briefs the media regularly at news conferences in Geneva, giving updates on the state of the epidemic and the world's preparedness for it, and even answers tweets from members of the public and corrects their misconceptions about the virus.

It is the challenge of a lifetime for a man who became the first African to head the WHO when he was elected to its top position in May 2017, having campaigned on the issue of universal health coverage.

"All roads lead to universal health coverage, and this is our top priority at WHO," he wrote in the Lancet medical journal in July 2017, shortly after taking office.

Dr Tedros began his medical career in Ethiopia, where he earned his Bachelor of Science in Biology in 1986 from the University of Asmara, in the region where he was born. He is fluent in Amharic, Tigrigna and English, according to a profile on the WHO website.

He went on to get his Master of Science in Infectious Disease Immunology from the London School of Hygiene and Tropical Medicine on a WHO scholarship, and his PhD in Community Health from the University of Nottingham in 2000, having written his dissertation on the effects of dams on malaria transmission in his home region. 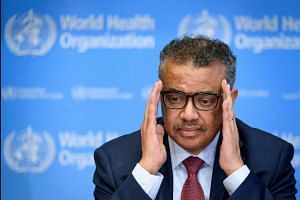 'Long list' of countries not doing enough to combat Covid-19, says WHO

13 myths about the coronavirus: WHO explains why they are not true

Dr Tedros was also a member of the Tigray People's Liberation Front party and, after heading Tigray's regional health bureau, was appointed health minister in 2005, a position he would hold until 2012.

He was widely credited with reforming the country's health system and cutting its child mortality and maternal mortality rates by 60 per cent each, training and deploying 38,000 community health workers throughout Ethiopia.

His career has not been without controversy, however. While campaigning for the WHO director-general post, Dr Tedros was accused of covering up possible cholera outbreaks in Ethiopia in 2006, 2009 and 2011. He denied doing so, telling Time magazine of his accusers: "They knew during the campaign they were losing ground, so they had to try their last try."

He also picked then Zimbabwe President Robert Mugabe as a WHO goodwill ambassador in October 2017, a decision he later reversed after a firestorm of criticism centred on the late dictator's human rights record and poor stewardship of Zimbabwe's health system.

These days, Dr Tedros has his hands full staying friendly with China and reassuring its government to encourage it to work with the WHO, while defending his approach from critics who say he has been too effusive in his praise of China.

Georgetown University global health law professor Lawrence Gostin told The Wall Street Journal in February: "It is very obvious to me - it must be to most people in the world - that Dr Tedros and the WHO are caught in an awfully dif-ficult position, between what the science dictates and a very, very powerful country."

A version of this article appeared in the print edition of The Straits Times on March 09, 2020, with the headline 'Challenge of a lifetime for man spearheading world's response to virus'. Subscribe
Topics:
More
Whatsapp Linkedin FB Messenger Telegram Reddit WeChat Pinterest Print Purchase Article Copy permalink