WASHINGTON - Celebrities such as Tom Hanks, Ellen DeGeneres, John Legend and Leonardo DiCaprio have paid tribute to outgoing US President Barack Obama in a farewell video that has already been viewed more than three million times since its release.

The video is entitled "Yes We Can: People share their most memorable moments from the Obama presidency" and serves as a sort of brief retrospective on Obama's two terms in office.

“Yes we can” is the trademark catchphrase used during the election campaign for Obama's first term.

Republican President-elect Donald Trump will replace Obama, a Democrat, in the White House on Jan 20.

“I never cried before, from an election result,” says singer John Legend of Obama's 2008 election win.

“When I was at the UN and I heard our President say that climate change is the most important issue facing, not only this generation, but also future generations, it was inspiring,” reflects DiCaprio.

DeGeneres applauds the President's dancing talent, saying: “The CVS experience with Michelle was pretty cool and dancing with Barack at his birthday party. And he’s a good dancer. He should not get any flack for that - you’re a good dancer”.

"Knocking on the Oval Office window," says Jerry Seinfeld of his favourite Obama moment. "That probably was the peak of my entire existence." 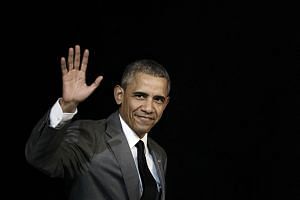 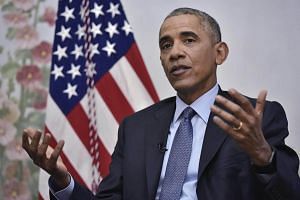 Tom Hanks says it is Mr Obama’s policy on Cuba which stands out for him.

“He just changed all the rules on the table with regards to Cuba with the most succinct motivation imaginable which is ‘what we’ve been doing hasn’t worked’,” he explains. "Which made all the sense in the world."

Kerry Washington explains how Mr Obama’s presidency made people feel like they had a stake in the White House. "You really felt those first three words of the constitution, 'We the people'."

Samuel L. Jackson recounts the moment that the Affordable Care Act was passed. “I have relatives that can’t afford health insurance, so it was really a great thing to know that if something happened to them, they could get cared for.”

The video also includes people explaining how Obama made them feel part of the White House during his presidency. People cite everything from him raising awareness of sexual violence to championing same sex marriage and transgender rights, to the signing of the Paris Agreement as their most memorable moments.

One school student in the third grade recounts how he personally replied to a letter to her, and Melinda Gates remembers seeing him engage with students in Boston schools. Another participant thanks him for lighting the first ever diya in the White House to observe Deepavali, the Hindu festival of light.

Myanmar State Counsellor Aung San Suu Kyi reflects on her visit to the US in September 2016: "One portion I remember most about the visit was how excited everybody in my house was. And especially all the young people who were helping us, and I think the way they got so excited and happy about it was something that I will always remember."

Obama will give his final speech as president in his hometown of Chicago on Tuesday (Jan 10).