Crowds of revellers gather to mark occasion with fireworks, parties and traditional rituals

NEW YORK • Fireworks burst in the sky and confetti fell as throngs of revellers cheered the start of 2020 in New York City's Times Square.

In one of the globe's most-watched New Year's Eve spectacles, the crowd counted down the last seconds of 2019 as a luminescent crystal ball descended down a pole.

About 1,360kg of confetti showered the sea of attendees, many of whom were also briefly rained on earlier in the evening as they waited in security pens for performances by stars including rap-pop star Post Malone, K-pop group BTS, country singer Sam Hunt and singer-songwriter Alanis Morissette.

"It was a dream. I wanted to do it, so this year a lot of people helped me to get here. So I'm here, and I'm thankful for that," said visitor Mariemma Mejias, 48, who flew to New York for the festivities from San Juan, Puerto Rico.

New Year festivities were held around the world.

In Rio de Janeiro, about three million people welcomed 2020 at Brazil's iconic Copacabana beach as almost 15,420kg of colourful fireworks went off for 14 minutes after midnight.

Rio de Janeiro holds one of the biggest New Year parties in the world, with music and drinks, and religious rituals on the shores. Many dress in white in a traditional sign of their hope for peace.

In Russia, the world's longest continuous New Year's Eve began with fireworks and a message from President Vladimir Putin urging citizens to work together in the coming year.

Mr Putin made the call in a short speech broadcast on television just before the stroke of midnight in each of Russia's 11 time zones. 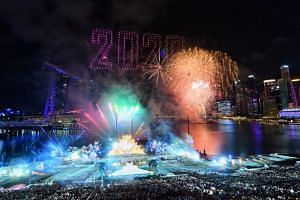 In New Zealand, major cities greeted 2020 with fireworks, following a year of challenges. On March 15, a lone gunman killed 51 people and wounded dozens at two mosques in the South Island city of Christchurch. And last month, a volcanic eruption on White Island killed at least 19 tourists and tour guides.

Meanwhile, Londoners watched a spectacular fireworks display from the banks of the River Thames that was launched from the London Eye and barges near Parliament.

The familiar chimes of London's Big Ben clock tower rang in the new year, even though they had been silent for most of 2019 because of extensive restoration work.

In South Africa, thousands of revellers gathered at Cape Town's Waterfront area to welcome the new year with music, dancing and fireworks in front of the city's iconic Table Mountain.

In past years, residents of Johannesburg's poor Hillbrow neighbourhood would celebrate the new year by tossing furniture, appliances and even refrigerators from the balconies of high-rise apartment buildings. Police have issued stern warnings, and it appears that the dangerous tradition has declined in popularity.

In Japan, people flocked to temples and shrines, offering incense with their prayers to celebrate the passing of a year and the first new year of the Reiwa era.

And in India, thousands of people ushered in the new year by demonstrating against a citizenship law despite Prime Minister Narendra Modi's attempts to dampen the protests, which have run for nearly three weeks.

The protests have rocked the country since Dec 12, when the government passed legislation easing the way for non-Muslim minorities from neighbouring Muslim-majority nations of Afghanistan, Bangladesh and Pakistan to gain Indian citizenship.

A version of this article appeared in the print edition of The Straits Times on January 02, 2020, with the headline 'Celebrations across the globe to welcome the new year'. Subscribe
Topics:
More
Whatsapp Linkedin FB Messenger Telegram Reddit WeChat Pinterest Print Purchase Article Copy permalink