WASHINGTON (NYTIMES) - As strange, serious and scary as the erroneous emergency notification Saturday about a missile attack against Hawaii may have been, it was far from the first such false alarm the country has faced.

Every decade since the dawn of the nuclear age has seen its share of close calls, experts said. During the Cold War, the government routinely dealt with hundreds of anomalies that could have led to a nuclear launch.

But it is rare for a false alert about an impending missile attack to actually reach the public, said Garrett M. Graff, who has written about the extensive preparations made to allow the government to continue in the event of a nuclear or terrorist attack.

Graff, the author of "Raven Rock: The Story of the US Government's Secret Plan to Save Itself - While the Rest of Us Die," said in a phone interview that the alert Saturday, coming at a time of heightened tensions with North Korea, was "pretty unprecedented."

"This was the precise scenario that is very top of mind for US officials and civilians across the country," he said.

As emotional and disruptive as the alert was, it was not the most dangerous episode of its kind because it did not reach the military's chain of command or decision-makers in government, he said.

Here is a look at a few cases that did.

A false alarm came when an early warning radar in Greenland reported to North American Air Defense Command headquarters that it had detected dozens of inbound Soviet missiles.

The report thrust Norad to its maximum alert level, according to the Union of Concerned Scientists, but officials later determined that the radar had been fooled by the "moonrise over Norway." 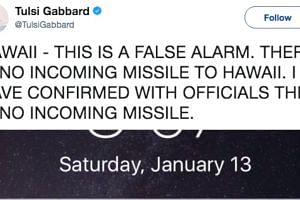 Computers at Norad indicated that the United States was under attack by missiles launched by a Soviet submarine.

Ten jet interceptors from three bases in the United States and Canada were scrambled, and missile bases went on "low-level alert," The New York Times reported.

When satellite data had not confirmed an attack after six minutes, officials decided that no immediate action was necessary, according to the Union of Concerned Scientists and The Times.

Investigations later discovered that a "war game" tape had been loaded into the Norad computer as part of a test. A technician mistakenly inserted it into the computer.

"The tape simulated a missile attack on North America, and by mechanical error, that information was transmitted into the highly sensitive early warning system, which read it as a 'live launch' and thus initiated a sequence of events to determine whether the United States was actually under attack," The Times reported.

Less than a year later, computers once again issued a warning about a nuclear attack.

Bomber and tanker crews were ordered to their stations, the National Emergency Airborne Command Post taxied into position, and the Federal Aviation Administration prepared to order every airborne commercial airliner to land, according to the Union of Concerned Scientists and The New Yorker.

President Jimmy Carter's national security adviser, Zbigniew Brzezinski, got a call informing him that 2,200 missiles were heading toward the United States.

Then Brzezinski got another call: It had been a false alarm.

An investigation later found that a defective computer chip - costing 46 cents - was to blame.

Stanislav Petrov, a 44-year-old lieutenant colonel in the Soviet Air Defence Forces, was the duty officer at a secret command centre outside Moscow when the alarms went off.

Computers warned that five missiles had been launched from a US base.

"For 15 seconds, we were in a state of shock," he later recalled in an interview with The Washington Post.

Petrov, according to his obituary in The Times, was a pivotal cog in the decision-making chain.

His superiors at the warning-system headquarters reported to the general staff of the military, which would consult the Soviet leader, Yuri V. Andropov, on whether to launch a retaliatory attack.

Electronic maps and screens were flashing as he tried to absorb streams of information.

His training and intuition told him a first strike by the United States would come in an overwhelming onslaught, not "only five missiles," he told The Post.

After five nerve-wracking minutes, he decided the reports were probably a false alarm. And they were.

The satellite had mistaken the sun's reflection off the tops of clouds for a missile launch.

Preparing for his regular Saturday afternoon radio broadcast, President Ronald Reagan quipped before a live microphone that he had "signed legislation that will outlaw Russia forever" and that "we begin bombing in five minutes."

Months later, The Times reported that two days after Reagan's joke, a low-level Soviet military official ordered an alert of troops in the Far East.

The alert was said to have been canceled about 30 minutes later by a higher authority.

US intelligence officials contended the alert was "a non-event".