NEW YORK (NYTIMES) - Shortly after Carlos Ghosn took over in 1999 as chief operating officer of an ailing Nissan Motor, he overhauled the way the company paid senior employees.

"The highest achievers got the highest rewards," according to a case study of Mr Ghosn's early years at Nissan, which is based in Yokohama.

He earned a reputation as one of his generation's most successful chief executive officers, but now, the way Mr Ghosn managed his own rewards may prove to be his downfall.

On Monday (Nov 19), Mr Ghosn was arrested in Tokyo after a company investigation alleged that he had deceived Japanese financial authorities about his pay package.

According to Tokyo prosecutors, Mr Ghosn and Mr Greg Kelly, a one-time Nissan human resources manager and current board member, under-reported Mr Ghosn's compensation between 2011 and 2015 by more than five billion yen (S$61 million). The prosecutors say they declared pay of just under five billion yen, which was half the nearly 10 billion yen he actually earned.

France stands by detained Ghosn: What next for Nissan/Renault alliance? 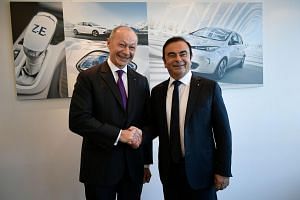 Neither man has been charged. Prosecutors have 72 hours to assess the accusations, and they can request an additional 20 days, depending on court approval, to investigate.

Nissan's board will meet on Thursday to consider their removal.

For an executive long lionised in business circles and celebrated by employees, the arrest was a shocking come-uppance.

Mr Ghosn, 64, is credited with turning around two carmakers, Renault and Nissan, and engineering an alliance - with those two companies and then Mitsubishi - that pioneered sharing technologies and cost-savings. His life has been chronicled in manga comic books in Japan.

He carried the Olympic torch before the 2016 Summer Games in Brazil. At Nissan factories, autograph-seeking employees swarmed him.

He was named one of the most powerful people in business by Fortune magazine in 2003. He became a fixture on the conference circuit and a regular at the World Economic Forum in Davos.

Mr Ghosn kept homes in Paris, Amsterdam, Beirut and Rio de Janeiro, shuttled around the globe on a corporate jet and dined with heads of state. He collected contemporary art, invested in wineries and, in 2016, rented out Versailles to celebrate his wedding to his second wife, Carole, along with her 50th birthday. The party was inspired by Sophia Coppola's film Marie Antoinette.

By the time prosecutors boarded his corporate jet on Monday at Haneda Airport in Tokyo to take him off for questioning, Mr Ghosn had been embroiled in several fights over executive pay, something of a recurring subplot in his career.

He has made many millions of dollars serving as chief executive and chairman of Nissan, Renault and Mitsubishi Motors. At times, his pay drew the ire of investors and politicians, including Mr Emmanuel Macron, now the French president, when he was finance minister in 2016.

"He was always arguing about whether he was adequately compensated," said Mr Robin Ferracone, founder of Farient Advisors, an executive compensation advisory firm. "The question was whether he should be compared to Japanese standards, or international standards or American standards."

In Japan, Mr Ghosn's pay far outstripped those of his counterparts. As chairman of Nissan last year, he reported income of 735 million yen, more than four times the pay of Toyota's chairman.

Even though "compared to executives in other countries, some people would regard him as underpaid", Mr Richter added, "I guess you could say there was something of a culture clash in that."

Mr Ghosn was unrepentant about his pay and engaging when discussing his achievements. When The Financial Times this year asked him if he was paid too much, he laughed. "You won't have any CEO say, 'I'm overly compensated,'" he said.

Mr Ghosn was born in Brazil to Lebanese immigrants and moved to Beirut when he was a toddler.

He went on to study engineering at an elite university in Paris, then worked at tyre maker Michelin for 18 years.

He started on the factory floor, preparing rubber for the manufacturing process.

Soon, he was a plant manager. Before long, he was deployed to his native Brazil as chief operating officer of Michelin's local subsidiary, where he expanded the business despite soaring inflation. In 1990, he was made chief executive for Michelin's troubled North American division, and he revived it.

But Michelin was a family company, and Mr Ghosn said he knew he was unlikely to become its CEO. When Renault, the French carmaker, recruited him in 1996, he joined as the executive vice-president overseeing manufacturing, purchasing and research and development.

At the time, Renault was reeling after a failed merger with Volvo, and Mr Ghosn focused on improving margins by slashing costs. His aggressive approach earned him the nickname "Le Cost Killer".

Mr Ghosn didn't particularly like the moniker, but he recently acknowledged its resonance. "It's sexy," he said earlier this year. "There's blood in it, there's meanness."

After Renault acquired a large stake in Nissan in 1999, Mr Ghosn was sent to Japan to become chief operating officer. In a country that values hierarchy and protocol, Mr Ghosn did away with much of the customary formality. He was seen walking the floor, shaking hands with junior staff members and bringing upper management and lower-level employees together in meetings.

Mr Ghosn's inviting gestures went only so far. Six months into his tenure, on the eve of the Tokyo Motor Show, he presented a plan for Nissan's revival. Billed the Nissan Revival Plan, it called for the elimination of some 21,000 jobs, or 14 per cent of the workforce, including several top managers.

A series of manga comics, published in 2002, depicted the moment when Mr Ghosn unveiled the restructuring plan to Nissan's executive team. The illustrations showed colleagues sweating about the news to close factories.

"Right now, Nissan is just like a boat that is on fire and we need to extinguish this fire as soon as possible," the cartoon Ghosn says.

In a country where layoffs are rare, Mr Ghosn was pilloried in the press and labelled a "gaijin", or foreigner. In a measure of his own confidence, Mr Ghosn pledged to step down if his plan failed.

The aggressive cost-cutting worked. Within a year, Nissan's finances had stabilised. Soon after, its debt load was slashed and its profits had improved. Mr Ghosn was named chief executive in 2001.

The next year, he took Nissan into China with a venture with Dongfeng Motor and revived sports car models like the Z and the GT-R.

But by the mid-2000s, the turnaround stalled, leading some critics to question whether Mr Ghosn's management magic had faded. In 2006, he pursued a partnership with General Motors in the United States, but GM eventually ended the talks.

The recession of 2008 forced Mr Ghosn to institute wide-ranging belt-tightening across the company, including new parts orders and factory overtime, and even the activities of the corporate-sponsored baseball team. Managers took a 5 per cent pay cut.

One investment that Mr Ghosn continued to pursue was the development of battery-powered cars. Profitability might still be elusive, but the alliance saw the models - Renault, with its subcompact Zoe, and Nissan, with its compact Leaf - as necessary innovations.

There was little sign that Mr Ghosn was slowing down - or less eager for calculated risk-taking.

In 2016, he helped to orchestrate Nissan's deal for a 34 per cent stake in Mitsubishi, bailing out the company after it was caught falsifying fuel economy estimates. He drew the smaller carmaker into the alliance with Renault and Nissan - and became chairman of Mitsubishi, earning him a third salary.

On Monday, Mitsubishi, like Nissan, said it would recommend that Mr Ghosn be removed as chairman.

In France, where Renault employs 47,000 workers, there was more a cautious response.

Finance minister Bruno Le Maire, said on Tuesday that Mr Ghosn was "no longer in a position capable of leading Renault" because of the inquiry, but France has seen no evidence of the crimes alleged in Japan.

In this small Tokyo yakitori restaurant, where photos of Mr Ghosn are prominently displayed, Mr Miyaji said the secretary told him "Ghosn was set up" and she added: "He will take a revenge. And he will come back to the restaurant."