SEATTLE/WASHINGTON (REUTERS) - Boeing on Wednesday (March 27) took its most aggressive moves yet to defend its core 737 airliner franchise, saying it had developed software fixes to prevent failures of an automated flight control system that is being scrutinised after two deadly crashes in the past five months.

Boeing, in the midst of one its worst crises in years, is under pressure from crash victims' families, airlines, lawmakers in Washington and regulators around the world to prove that the automated flight control systems of its 737 Max aircraft are safe, and that pilots have the training required to override the system in an emergency.

The 737 Max planes were grounded worldwide following an Ethiopian Airlines disaster on March 10 that killed 157 people, five months after a Lion Air crash in Indonesia that killed 189 people.

A Boeing official in Seattle said on Wednesday the timing of the software upgrade was "100 per cent independent of the timing of the Ethiopian accident", and the company was taking steps to make the anti-stall system "more robust". There was no need to overhaul Boeing's regulatory relationship with the US Federal Aviation Administration (FAA) now, the company said.

"We are going to do everything that we can do to ensure that accidents like these never happen again," Mr Mike Sinnett, vice-president for product strategy and future airplane development, told reporters.

The FAA said it had not reviewed or certified the software upgrade yet. It has agreed to significantly improve its oversight of organisations performing certifications on its behalf by July, US Transportation Department Inspector General Calvin Scovel told a Senate panel on Wednesday.

US Transportation Secretary Elaine Chao and some lawmakers on Wednesday questioned why Boeing did not require safety features on its top-selling plane that might have prevented the crashes. 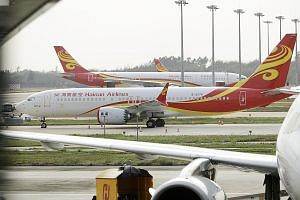 China took the lead to ground Boeing 737 Max. How did it beat FAA?

Boeing 737 Max: What to expect at US Senate hearing, Boeing meetings

Executives with US airlines welcomed Boeing's moves, but want US regulators to sign off on the upgrade.

Southwest Airlines, which on Wednesday became the first major airline to formally cut its financial outlook for the year after being forced to pull its Max fleet of 34 jets out of service, supported Boeing's decision.

"Boeing's software update appears to add yet another layer of safety to the operation of the Max aircraft," Southwest's certificate chief pilot Bob Waltz said.

Members of the Allied Pilots Association, which represents pilots of American Airlines Group, the largest US carrier, were among the 200 airline customers and others who spent the day at Boeing getting details.

He said he was confident, however, flying the 373 Max in its current state. It could take two weeks after new training protocols are approved to train all American pilots, Guthrie said.

United Airlines vice-president Michael Quiello said the airline was optimistic about the software update, but was counting on the FAA to certify the change.

Airline stocks turned positive after Boeing unveiled the software fix. CFRA analyst Jim Corridore, who has a "buy" rating on Boeing, said news from the company and the Washington hearing were positive steps towards getting the Max jets airborne again.

Boeing, the world's largest planemaker, said the anti-stall system, which is believed to have repeatedly forced the nose lower in the accident in Indonesia last October, would do so only one time after sensing a problem, giving pilots more control.

The system will also be disabled if two airflow sensors that measure the "angle of attack", or angle of the wing to the airflow, a fundamental parameter of flight, offer widely different readings, Boeing said. Reuters reported those details earlier this week. 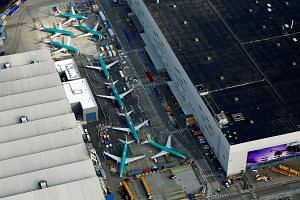 The anti-stall system - known as MCAS, or Manoeuvring Characteristics Augmentation System - has been pinpointed by investigators as a possible cause in the fatal crashes in both Indonesia and Ethiopia.

Current 737 pilots will also have extra computer-based training following criticism that MCAS was not described in the aircraft manual.

The changes were drawn up in response to the Lion Air crash but are seen as crucial to regaining the trust of pilots, passengers and regulators after the Ethiopia crash prompted a worldwide grounding of Boeing 737 Max planes.

Ethiopian officials and some analysts have said the Ethiopian Airlines jet behaved in a similar pattern before crashing shortly after take-off from Addis Ababa, but that investigation is still at an early stage.

Boeing's Sinnett said the software had been through extensive testing, including flights with the FAA. However, he said he could provide no timeframe for when the 737 Max jets would return to service.

Boeing said it would change the design of the system so that it no longer relied on a single sensor. The changes also would make standard visual warnings to the pilots if the system stopped working. Previously, those warning messages and displays had been optional.

Reuters reported in November after the Lion Air disaster that some aviation experts believed the optional alert could have alerted engineers about mechanical faults, leading to an industry debate over whether the system should be mandatory.

Current 737 Max pilots have criticised Boeing for not disclosing more details about MCAS initially. Mr Sinnett said the company has added details on MCAS to its flight crew operations manual. All pilots will need to complete this training before returning to the skies, he said.