NEW YORK (AFP) - Boeing has flown test flights of its 737 Max to evaluate a fix for the system targeted as a potential cause of two deadly plane crashes, two sources familiar with the matter said Tuesday (March 26).

The aviation giant, which has been under fire and its flagship narrow-body planes grounded since March 13, tested the system upgrade on Monday, two days after pilots from American Airlines did simulation flights in Renton, Washington, the sources said.

Boeing needs authorisation from the Federal Aviation Administration before the Max can return to service.

But the company still has not submitted its proposed software patch to the FAA, a government source told AFP.

Engineers have been focusing on addressing problems with the MCAS system, a stall prevention system designed to point the nose of the 737 Max 8 downward if it is in danger of stalling, or losing lift.

The system has been criticised since it can malfunction, and make it difficult for pilots to control the aircraft. Both of the recent crashes occurred moments after takeoff. 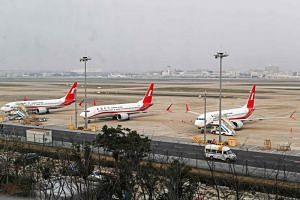 The MCAS, or Maneuvering Characteristics Augmentation System, was installed in the Max because they are heavier than in the previous version of the 737.

Boeing remains under intense pressure following the two crashes, which will be the subject of a Senate hearing on Wednesday.

Top US transportation officials are expected to face questions from lawmakers on the FAA's certification of the 737 Max and whether regulators have become too cozy with the company, and fast-tracked some approvals.