WASHINGTON (REUTERS) - President Donald Trump's planned "great, great wall" began morphing into a physical barrier and an array of high-tech gadgets in congressional talks launched on Wednesday (Jan 30) to forge a compromise on security at the United States border with Mexico.

Although there were no guarantees a deal could be reached by a Feb 15 deadline, lawmakers on both sides showed a willingness to avoid ultimatums and seek common ground.

Some negotiators from Mr Trump's Republican Party avoided uttering the word "wall" during the 17-member border security panel's first session on Wednesday. They spoke of a mix of enforcement tools, as Democrats had urged.

The long, contentious debate over one of Mr Trump's biggest 2016 campaign promises - a concrete border wall financed by Mexico - entered a new stage with the committee's launch last week ending a 35-day partial closure of the government.

Lawmakers have an opportunity, Republican Senator Shelley Moore Capito said, to choose "all of the above" for border investments, "including physical barriers where it makes sense". Even Mr Trump's early-morning Twitter message on the committee's urgent work left some wiggle room on the wall.

"If the committee of Republicans and Democrats now meeting on Border Security is not discussing or contemplating a Wall or Physical Barrier, they are Wasting their time!" he tweeted.

The Feb 15 deadline was imposed when Mr Trump agreed last week to end the shutdown and give lawmakers another chance to forge a deal or face another closure. 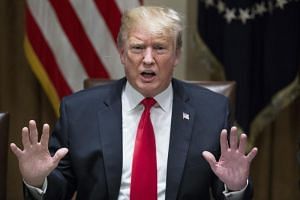 US government shutdown: Why the Trump administration caved in

At a news conference, Democrats handed out a fact sheet they described as their opening proposal. It included no money for a wall or physical barriers, but House Appropriations Committee chairwoman Nita Lowey said: "Everything's on the table."

But she added: "Smart border security is not overly reliant on physical barriers, which the Trump administration has failed to demonstrate are cost effective compared to better technology and more personnel.

"Every dollar spent on ineffective proposals means one less dollar invested in measures that actually keep us safe."

Instead of Mr Trump's wall, Democrats have been urging investment in high-tech equipment to enhance border security, such as drones, sensors and advanced scanning equipment, along with additional law enforcement personnel.

On Dec 22, about a quarter of the US government closed, leaving 800,000 federal workers without pay for the next five weeks. The shutdown was prompted by Mr Trump's demand that any shutdown-ending legislation contain US$5.7 billion (S$7.7 billion) for his wall.

Mexico long ago refused to pay for it. Mr Trump now wants US taxpayers to foot the bill for a project that some estimates have shown could cost more than US$23 billion. He says it is needed to keep out undocumented immigrants and illegal drugs.

Democrats broadly support more border security, but oppose the wall and stood firm against Mr Trump's demand that money for it be part of shutdown-ending legislation. Mr Trump temporarily gave up that demand last Friday and agreed to the committee.

Congress has until Feb 15 to pass a package to fund several federal agencies through Sept 30. That gives lawmakers little more than a week to settle their differences and leave time for both houses of Congress to debate and vote on any deal.

Mr Trump has moved off his demand for a 3,220km concrete barrier and now talks about either a wall or "physical barrier" on only some parts of the border. Democrats in the past have backed "fencing". The Department of Homeland Security says 1,050km of pedestrian and vehicle barriers already exist.

Democrats repeatedly have voted for US$1.3 billion in added border funds for this year. Late last year, Mr Trump even signalled his willingness to go along with that figure before reversing course and insisting on US$5.7 billion for his wall.

Wednesday's committee meeting might be the only public session, with future sessions likely behind closed doors.

If lawmakers do not craft a deal Mr Trump likes, he has threatened two possible next steps: another shutdown, or declaring a "national emergency" and taking existing funds appropriated by Congress for other purposes - possibly from the Defence Department, for example - to build his wall.

There is bipartisan opposition in Congress to the emergency strategy, which likely would spark a legal challenge.