NEW YORK (AFP) - Once dismissed by many as a fringe candidate with wacky socialist ideas, Bernie Sanders campaigned to the brink of the Democratic presidential nomination in 2016 and has now set his sights on the White House once again.

Sanders, a 77-year-old US Senator from Vermont, announced on Tuesday (Feb 19) that he will join an already crowded field of candidates seeking to challenge President Donald Trump in 2020.

"I wanted to let the people of the state of Vermont know about this first," Sanders said on Vermont Public Radio.

He called Trump a national embarrassment and a pathological liar.

"I also think he is a racist, a sexist, a homophobe, a xenophobe, somebody who is gaining cheap political points by trying to pick on minorities, often undocumented immigrants," Sanders said.

Like Trump, Sanders was an outsider when the 2016 presidential primaries began, little known to the public at large and initially not given much of a chance against the Hillary Clinton machine.

But he came close to pulling off the upset and ended up winning 23 primaries or caucuses against the better-funded Clinton.

Sanders galvanised a broad coalition with his anti-Wall Street rhetoric and talk of a "political revolution". Though the oldest candidate in the field, Sanders garnered passionate support among young liberals with his calls for universal healthcare, a US$15 minimum wage and free public university education.

He made the fight against income inequality, which he has called the greatest moral, economic and political issue of our times, the centrepiece of his insurgent campaign. 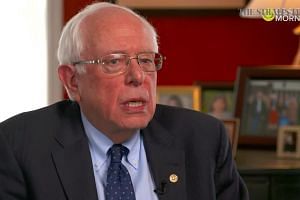 The secret to winning the 2020 US presidential race

How old is too old to be US president?

Four years later, Sanders' policies remain the same but much has changed on the political landscape.

Trump won the election and Alexandria Ocasio-Cortez, a young congresswoman from New York, is a rising Democratic star, embracing many of the positions held by Sanders.

"We have had more success in ideologically changing the party than I would have dreamed possible," Sanders said in an interview with GQ magazine.

"The world has changed."

From Brooklyn to Senate

Bernard Sanders was born on Sept 8, 1941, in Brooklyn, New York, into a family of Jewish immigrants from Poland.

He attended Brooklyn College and later the University of Chicago, where he was active in the civil rights movement, attending the 1963 "March on Washington" where Martin Luther King Jr delivered his "I Have a Dream" speech.

After graduating, Sanders worked on an Israeli kibbutz and moved to Vermont, where he worked as a carpenter and film-maker.

In 1981, he was elected mayor of Burlington, the state's largest city, by a mere 10-vote margin and went on to win another three terms.

He served as mayor until 1989, winning election as an independent to the US House of Representatives in 1990.

While Sanders remains popular among many Democrats, some in the party are questioning whether their champion this time around should be a septuagenarian white man.

Multiple women have already joined the race, including Kamala Harris, an African-American senator from California, seen as the early front runner.

Some #MeToo movement activists have also come out against a Sanders candidacy after several employees on his 2016 campaign complained of sexual harassment by staffers.

Sanders has issued an apology "to the women on my 2016 campaign who were harassed or mistreated".

"We can't just talk about ending sexism and discrimination," he said. "It must be a reality in our daily lives."

Famously short-tempered and irascible, Sanders also still displays the energy of a much younger man - he campaigned tirelessly for Democratic candidates in the 2018 midterms.

Sanders claims that he does not have a burning desire to occupy the White House and that the priority is defeating Trump.

"If there's somebody else who appears who can, for whatever reason, do a better job than me, I'll work my ass off to elect him or her," he told New York magazine.

Sanders lives in Burlington with his second wife Jane. Together, they have four children and seven grandchildren.