WASHINGTON (WASHINGTON POST) - Former United States President Barack Obama, who does not often comment on current politics, seemed to endorse on Saturday (July 27) an op-ed written by 148 African Americans who served in his administration that called out President Donald Trump for recent comments degrading four congresswomen of colour.

"I've always been proud of what this team accomplished during my administration. But more than what we did, I'm proud of how they're continuing to fight for an America that's better," Mr Obama tweeted, with a link to the op-ed published on Friday evening in The Washington Post.

Under the headline, "We are African Americans, we are patriots, and we refuse to sit idly by", the former Obama administration officials vowed to stand up against the "racism, sexism, homophobia and xenophobia... wielded by the president and any elected official complicit in the poisoning of our democracy".

"There is truly nothing more un-American than calling on fellow citizens to leave our country - by citing their immigrant roots, or ancestry, or their unwillingness to sit in quiet obedience while democracy is being undermined," they wrote.

After Mr Trump tweeted that four minority lawmakers should "go back" to the places they were from and a crowd of Trump supporters chanted "Send her back!" at the mention of Representative Ilhan Omar of Minnesota, a Somali refugee who became a US citizen in 2000, at a campaign rally, most Democrats became indignant.

Even former first lady Michelle Obama, who also shies away from Trump-era outrage, made known her disdain for Mr Trump's comments.

"What truly makes our country great is its diversity," Mrs Obama tweeted, an apparent reference to Mr Trump's campaign slogan. "I've seen that beauty in so many ways over the years. Whether we are born here or seek refuge here, there's a place for us all. We must remember it's not my America or your America. It's our America."

The former president retweeted his wife, but that was the closest he came to weighing in on the issue of Mr Trump's racist remarks, until he shared his former staff's op-ed.

Since leaving office, Mr Obama has been extremely selective about when he weighs in. By tradition, former presidents generally refrain from criticising their successors, even if they are from opposite political parties, as it is with Mr Obama and Mr Trump. 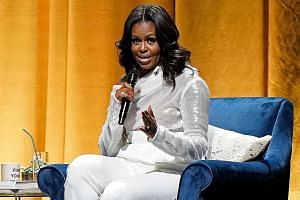 It's diversity that makes US truly great, says Michelle Obama

However, some Obama supporters have expressed dismay as he seemed to disappear from public view as the Trump White House set out to systematically dismantle his legacy.

Mr Obama reappeared for the final weeks of the 2018 midterms, crisscrossing the country to campaign for Democrats and warning that "the character of our country is on the ballot".

Now, as two dozen Democrats vie for the chance to take on Mr Trump in 2020, Mr Obama has once again faded into the background to allow that process to play itself out without his influence.

But those who worked for him wrote that watching up close as racism surged during and after the first black presidency "provided jet-fuel for our activism, especially in moments such as these".