WASHINGTON (AFP) - President Barack Obama on Thursday (March 10) bristled at suggestions that he had contributed to the partisanship that has given rise to Donald Trump, saying he was not responsible for the Republican party's "crackup."

"One of my regrets is the degree to which polarization and the nasty tone of our politics has accelerated rather than waned over the course of the last seven-and-a-half years," Obama said in a press conference.

"What I'm not going to do is to validate some notion that the Republican crackup that's been taking place is a consequence of actions that I've taken. 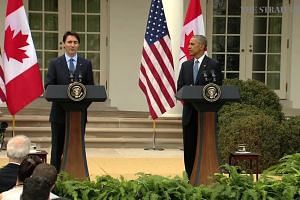 "I have been blamed by Republicans for a lot of things, but being blamed for their primaries and who they're selecting for their party is novel," he said.

Obama insisted he was ready to try and bridge divides, but said blame for Trump lay elsewhere.

"Republican political elites and many of the information outlets - social media, news outlets, talk radio, television stations - have been feeding the Republican base, for the last seven years, a notion that everything I do is to be opposed."

Obama added that he had not contributed to a political tone that questions whether he is American, a suggestion his supporters see as thinly veiled racism.

"I don't think that I was the one to prompt questions about my birth certificate, for example. I don't remember saying, 'Hey, why don't you ask me about that?'"

All that created "an environment where somebody like a Donald Trump can thrive," Obama said.

"He's just doing more of what has been done for the last seven and a half years."

"I think it is very important for them to reflect on what it is about the politics they've engaged in that allows the circus we've been seeing to transpire and to do some introspection because, ultimately, I want an effective Republican Party."