WASHINGTON (REUTERS) - The departure on Friday (Aug 18) of Stephen Bannon, the White House's top economic nationalist, will likely tip the trade policy scales in favour of the Trump administration's "globalist" faction, which could soften the stance towards two of Trump's favourite targets: China and the North American Free Trade Agreement (Nafta).

But after news that Trump had fired Bannon from his post as chief strategist, trade experts said it may take some time for National Economic Council Chairman Gary Cohn, Treasury Secretary Steven Mnuchin and Agriculture Secretary Sonny Perdue to start winning more debates on trade policy.

Bannon and White House Trade and Manufacturing Office director Peter Navarro were often allied in taking hardline anti-China stances over currency manipulation, steel tariffs and other trade issues, often opposed to Cohn, Mnuchin and Perdue, according to lobbyists who been involved in the debates.

The Cohn-led group proved more influential in the administration's decisions in April not to label China a currency manipulator and to renegotiate the North American Free Trade Agreement (Nafta) instead of terminating it.

More recently, they have pushed for a delay in a decision on the imposition of broad steel tariffs.

With Bannon gone, "there's not a replacement for that voice in internal debates," said a senior administration official who was not authorised to speak publicly on the issue.

"Without Steve constantly pushing back on every policy idea coming from the so called 'globalists', it's easy to see how they could have a chance to start winning more policy battles," the official said. 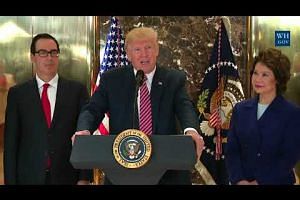 Bannon leaves White House - but vows to fight on for Trump

In the short term, the trade policy trajectory won't change much, said Derek Scissors, a China trade expert at the American Enterprise Institute, a pro-business conservative think tank in Washington. Many of Trump's views on trade pre-dated Bannon's arrival on his campaign in any case.

The US Trade Representative's office announced on Friday that it will proceed with a planned investigation into whether China is misappropriating US technology and intellectual property through unreasonable investment rules.

Scissors said Bannon's departure will show in what decisions the administration makes following a year-long study of the issue. "It's about the final choices on do we go forward with these very difficult sanctions on the Chinese or do we look to make a tradeoff on a security issue, and Bannon would have been in the first camp," Scissors said.

The offices of USTR Robert Lighthizer and Commerce Secretary Wilbur Ross, who have been pushing for stronger trade policies to reduce US trade deficits with China, Mexico and other countries, declined to comment on Bannon's departure, referring policy questions to the White House.

But industry lobbyists, who have been whipsawed by economic policy twists over trade and an ill-fated border tax proposal, were sceptical that much would change.

Two lobbyists on the sidelines of Nafta talks in Washington said that even without Bannon, they will assume the status quo on trade policy as long as fierce China critic Navarro is in the White House.

"I doubt this effort will evaporate, though it may evolve," she said.