WASHINGTON (NYTIMES) - President Donald Trump hailed the Reverend Billy Graham as “an ambassador for Christ” who helped lift up the American spirit, speaking during a memorial service in the Capitol Rotunda to honour the pastor following his death at 99 last week.

Politicians and other well-wishers began gathering at the US Capitol on Wednesday morning (Feb 28) to pay tribute to Graham, whose body arrived for a daylong memorial before his funeral in North Carolina on Friday.

Trump laid a wreath at the coffin of Graham, whose global ministry included close relationships with presidents since Harry Truman.

His legacy includes an outsize influence on the life of America by encouraging millions of evangelical Christians to be engaged in social and political activism.

“Today, in the centre of this great chamber lies legendary Billy Graham,” Trump said in brief remarks, “an ambassador for Christ who reminded the world of the power of prayer and the gift of God’s grace.”

Trump added: “Today, we say a prayer for our country, that all across this land, the Lord will raise up men and women like Billy Graham to spread a message of love and hope.”

Republican Senator Mitch McConnell, the majority leader, called Graham “a happy instrument in the hands of his creator” and called on the nation to remember him.

“The secret of my work, he explained, is God,” McConnell said of Graham. “I would be nothing without Him. That is what made Billy Graham America’s pastor.” 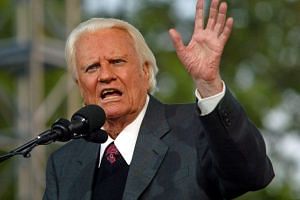 Speaker Paul Ryan said Graham repeatedly challenged the nation to look to God and to look within.

“In those moments, when we felt weak in spirit, when our country was on its knees, he reminded us, he convinced us that is exactly when we find our grace and our strength,” Ryan said.

Graham joined an exclusive list of more than 30 Americans who have lain in state or in honour in the rotunda, including lawmakers, presidents, civil rights activists, law enforcement officers killed in the line of duty, an FBI director, military commanders and the remains of unidentified soldiers from several of the nation’s wars.

He became only the fourth private citizen to lie in honour at the Capitol, the first since Rosa Parks did so in 2005.