"They discussed global issues including migration, climate change and countering violent extremism. Asean and the UN also discussed ways to work together to implement the 2030 UN Agenda for Sustainable Development,'' said an MFA statement.

"In his speech, Minister Balakrishnan stressed the need for a rules-based global order based on the principles of multilateralism, an open global architecture, and inclusive economic growth," said the statement.

He welcomed the UN's role as a catalyst for peace and development, and underlined the important role of the UN as a platform for countries to work together to find solutions to complex emerging challenges, the statement added. 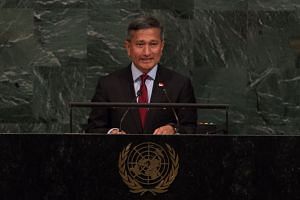 In the evening, Dr Balakrishnan and Mrs Balakrishnan attended an Asean foreign ministers' dinner hosted by the Philippine Secretary of Foreign Affairs Alan Cayetano and his wife, said MFA.