WASHINGTON (NYTIMES) - When President Donald Trump made his first visit to the United Nations last year, he ridiculed North Korea's leader Kim Jong Un as a suicidal "rocket man" and threatened to "totally destroy" his country.

He also vowed to rip up the Iran nuclear deal, which he called an "embarrassment to the United States".

This week, he returns to trumpet the overture he has since made to the North Korean leader, whom he now calls "very honourable", despite evidence that Mr Kim continues to build a nuclear arsenal.

And while he has dealt his long-promised blow to the nuclear deal, he has also said he would "always be available" for a meeting with Iranian President Hassan Rouhani.

For Mr Trump's advisers, the biggest risk at the UN General Assembly this year is the reverse of what it was last year: not that he will be dangerously undiplomatic, but that he will be overly enthusiastic about engagement with wily adversaries.

Far from restraining Mr Trump's belligerent tendencies, his senior aides are engaged in a quiet effort to avoid a direct encounter with Iran's leader that he would be unprepared to handle or concessions that they fear could undermine their effort to keep pressure on North Korea.

A meeting with South Korea's President Moon Jae-in on Monday (Sept 24) also looms large, since Mr Moon is likely to press him to make concessions to keep the talks with Mr Kim going. 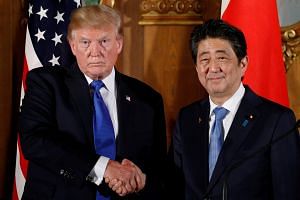 "The President is prepared to bluster and threaten, but he also wants to achieve the deal of the century," said Mr Robert Malley, who helped negotiate the Iran nuclear deal as an official in the Obama administration.

"With North Korea, it worked because he had a willing partner," Mr Malley said. "The problem he's going to face with Iran is that the leaders there believe a meeting would validate his strategy."

Officials said they were fairly confident that a meeting with Mr Rouhani would not happen, mainly because the Iranians have said they are not interested in one.

Laying out a series of requirements for the Iranians is one thing; controlling the President's conviction that he can outmanoeuvre any leader, or strike any deal, is another.