His death was announced in a statement - on behalf of the boy's parents, Melissa and Chris - on the Praying for Dorian Facebook page on Wednesday (March 9).

"He was surrounded by people who love him and his transition to heaven was very peaceful. He was embraced by both mom and dad."

The Rhode Island boy had been receiving treatment for rhabdomyosarcoma, a rare form of pediatric soft tissue cancer, after he was diagnosed when he was just four years old.

His parents had decided to stop his treatment in January this year when it was discovered that the disease had spread to his spinal cord and brain. 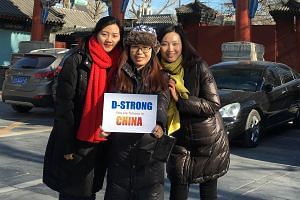 No bridge too far for dying boy

Dorian's story of how he told his father that he would like to become famous in China because it had the Great Wall spread far and wide in the country.

Thousands of people uploaded photos of themselves at the Great Wall and other locations across China, with many holding up signs displaying the hashtag #DStrong.

In Dorian's hometown of Westerley, Rhode Island, over 2,500 residents spelt out the word #DStrong on a beach on Jan 18. The Rhode Island General Assembly also announced Jan 20 as #DStrong Day to honour Dorian.