WASHINGTON (BLOOMBERG) - The American Bar Association has called on the US Senate to delay a vote on Judge Brett Kavanaugh's Supreme Court nomination until "after an appropriate background check into the allegations" made by university professor Christine Blasey Ford regarding sexual assault is completed by the FBI.

"We make this request because of the ABA's respect for the rule of law and due process under law," ABA President Robert Carlson said in a letter to Judiciary Committee Chairman Chuck Grassley, an Iowa Republican, and the panel's top Democrat, Ms Dianne Feinstein of California.

"The basic principles that underscore the Senate's constitutional duty of advice and consent on federal judicial nominees require nothing less than a careful examination of the accusations and facts by the FBI."

The letter marked a last-minute hitch in Judge Kavanaugh's nomination and came at the end of a tumultuous day in which Dr Blasey Ford, in an emotional appearance before the committee, accused Judge Kavanaugh of attacking her at a Maryland house party in 1982.

She was followed by Judge Kavanaugh, who fiercely denied the allegations and lashed out at Democrats on the panel.

The letter emerged before a planned vote on Friday (Sept 28) by the Judiciary Committee to advance the Kavanaugh nomination to the full Senate. Republican leaders were hoping to confirm him to the high court by early next week.

"Each appointment to our nation's Highest Court (as with all others) is simply too important to rush to a vote," Mr Carlson said in the letter, which was provided by a Senate aide. 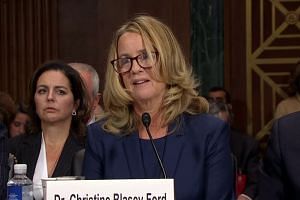 The non-partisan organisation is composed of lawyers and law students and a high rating is highly prized by judicial nominees.

"For 12 years, everyone who has appeared before me on the DC Circuit has praised my judicial temperament," Judge Kavanaugh said on Thursday during his combative testimony.

"That's why I have the unanimous well-qualified rating from the American Bar Association."

"If you lived a good life, people will recognise it like the American Bar Association has - the gold standard," he said. "His integrity is absolutely unquestioned."