LOS ANGELES (AFP) - Amanda Knox, the US student who was convicted then acquitted of killing her roommate in Italy, was already married when she launched an appeal for thousands of dollars to pay for a February wedding, according to media reports.

Documents filed in the western US state of Washington show that Ms Knox and Mr Christopher Robinson tied the knot on Dec 7, the reports said.

The revelation comes less than two weeks after the couple launched a crowdfunding website asking for money to help fund their space-themed nuptials.

"Let's face it, we don't need any more stuff," the couple wrote on their website.

"What we do need is help putting on the best party ever for our family and friends!

"Instead of a traditional registry, we're accepting donations towards the cost of the wedding," they added.

The couple said they had earmarked money for the wedding slated for next year but had to spend it in June on Ms Knox's first trip back to Italy since she was exonerated in 2011 of killing her British roommate Meredith Kercher in the central Italian city of Perugia. 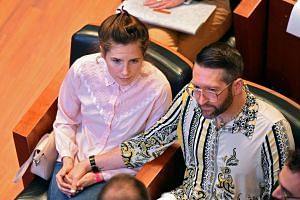 Amanda Knox to wed and asks public to pay for it 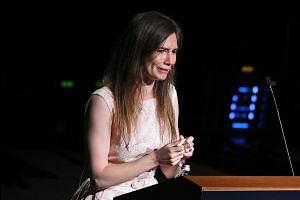 Amanda Knox breaks down in Italy as she relives murder trial

The Seattle native spent four years in jail for the 2007 killing before an appeals court threw out the conviction for lack of evidence.

Ms Knox, 32, and Mr Robinson, 35, acknowledged on Thursday (Aug 1) that they had indeed wed in December but said the ceremony was a formality tied to tax and insurance concerns.

"We filed paperwork to be legally married in December of last year to simplify our taxes and insurance," the couple said in a statement.

"But we have not yet celebrated our wedding with our loved ones."

"The tabloids think it's a 'scoop' that @manunderbridge & I filed legal paperwork in December. Guess what? We've also been living together out of wedlock for 3 years. Go back to the 1300s; our wedding remains in the future-leap day, 2020," she wrote.