NEW YORK • Jeffrey Epstein, the financier indicted on sex trafficking charges last month, has committed suicide in a Manhattan jail, officials said yesterday, a day after a cache of previously sealed legal documents provided new, disturbing details about what was going on inside Epstein's homes and how his associates recruited young women and girls.

Epstein hanged himself and his body was found yesterday morning at the Metropolitan Correctional Centre in Manhattan. A gurney carrying a man who looked like Epstein was wheeled out of the correctional centre around 7.30am local time, The New York Post reported.

Epstein had previously been moved to a suicide-watch unit after being found unconscious in his cell with marks on his neck on July 23, a week after his bail request had been rejected.

"The coward and serial predator may have taken his own life but we shall continue to seek justice on behalf of our clients," Mr Josh Schiller, a lawyer for some of Epstein's alleged victims, said in a text message.

New York federal prosecutors last month charged Epstein, 66, with sex trafficking of girls as young as 14, and details of his behaviour have been emerging for years.

The documents released by a federal appeals court on Friday - among the most expansive sets of materials publicly disclosed in the 13 years since Epstein was first charged with sex crimes - include depositions, police incident reports, photographs, receipts, flight logs and even a memoir written by a woman who says she was a sex-trafficking victim of Epstein and his acquaintances.

The documents were filed as part of a defamation lawsuit in federal court that Ms Virginia Giuffre brought in 2015 against Ms Ghislaine Maxwell, Epstein's long-time companion and confidant.

Ms Giuffre and Ms Maxwell settled the lawsuit shortly before the trial was to begin in 2017.

Ms Giuffre testified in court documents that were made public for the first time on Friday that Epstein and Ms Maxwell sent her to have sex with former New Mexico governor Bill Richardson, former US senator George Mitchell and asset manager Glenn Dubin - allegations the three deny.

She was also sent to modelling executive Jean Luc Brunel and the late MIT scientist Marvin Minsky, according to parts of a 2016 deposition she gave.

In one part of Ms Giuffre's testimony, Ms Maxwell's attorney asked her to "name the other politically connected and financially powerful people that Ghislaine Maxwell told you to go have sex with".

"They instructed me to go to George Mitchell, Jean Luc Brunel, Bill Richardson, another prince that I don't know his name," she said. "A guy that owns a hotel, a really large hotel chain; I can't remember which hotel it was."

She continued: "There was, you know, another foreign president; I can't remember his name," she said. "There's a whole bunch of them that I just - it's hard for me to remember all of them." 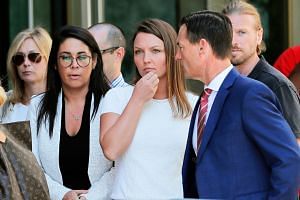 The testimony by Ms Giuffre, who claims she was a "sex slave" for Epstein from 2000 to 2002, expands on her previous allegations, in court filings and tabloids, that she was forced to have sex with Britain's Prince Andrew and Harvard University law professor Alan Dershowitz. Both men have strenuously denied those allegations.

The Miami Herald and other media outlets petitioned the court to have the lawsuit documents unsealed.

The request was initially denied, but an appeals court ordered them released last month, just days before Epstein was arrested on sex-trafficking charges.

He had pleaded not guilty.

Epstein, a financier with opulent homes, a private jet and access to elite circles, had been dogged for decades by accusations that he had paid dozens of girls for sexual acts in Florida.

A self-described "collector" of rich and powerful people, Epstein had links to a Who's Who of prominent political and business figures. Members of that circle, who included former US president Bill Clinton and billionaire Leslie Wexner, all distanced themselves from the financier after his July arrest.

US prosecutors said Epstein used his wealth and power to sexually abuse dozens of young girls for years at his homes, paying them hundreds of dollars in cash for each encounter and hundreds more if they brought in more victims.

They were initially recruited to give Epstein massages, which became increasingly sexual in nature.

At least three of Epstein's employees were involved in recruiting and scheduling minors for sexual encounters with him, as well as other unspecified "associates", the authorities said.

One was based in New York, while two other assistants based at his mansion in Palm Beach were responsible for scheduling the encounters there and escorting victims to a room in the house, according to the indictment.

The US accused Epstein of "creating a vast network of victims".

Epstein pleaded not guilty to charges of sex trafficking in minors and conspiracy, and said he fully complied with the law for more than 14 years. He previously avoided federal criminal charges in 2008 after prosecutors brokered a widely criticised deal that allowed him to plead to solicitation of prostitution from a minor and serve 13 months in jail.