Mrs Hillary Clinton and Mr Donald Trump are making a final push through critical swing states in the last weekend of the election, as polls show a presidential race on the edge.

Although Mrs Clinton no longer appears to be suffering any further fallout from the e-mail scandal that hogged the headlines last week, her lead of an average of 2.3 percentage points is close enough such that a further shock or a modest polling error could turn the tables.

Few expect significant fluctuations in the closing stages, however, and the candidates themselves are now focusing solely on energising their support bases. Neither will be venturing into hostile territory for the rest of the campaign.

Mr Trump's hectic rally schedule has him visiting a host of rural towns in swing states where his support base is centred, in the hope that a large turnout among rural white voters can overwhelm the Democrat's advantage in the cities.

An event that was part-pop concert, part-election rally in Cleveland, Ohio, drew the most attention on Friday night, with America's music royalty Jay-Z and Beyonce stumping for the Democrat.

Said Beyonce to a packed arena: "Less than 100 years ago, women did not have the right to vote. Look how far we've come from having no voice to being on the brink of making history." 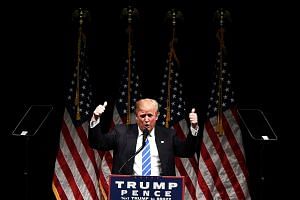 Donald Trump: The comeback kid who likes to win 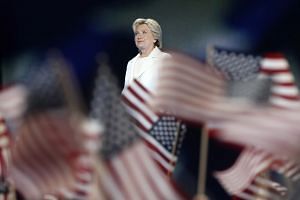 Hillary Clinton: Nothing comes easy but she's an achiever

No one on stage mentioned Mr Trump by name. Even Mrs Clinton - who has attacked Mr Trump during her recent rallies - focused instead on the symbolism of her candidacy.

"We have unfinished business to do. More barriers to break and, with your help, a glass ceiling to crack once and for all," Mrs Clinton said.

Mr Trump took aim at Mrs Clinton's use of stars to draw crowds. Speaking at a rally in Pennsylvania hours before the Clinton rally, he said: "I didn't have to bring J-Lo or Jay-Z - the only way she gets anybody. I'm here all by myself. Just me. No guitar, no piano, no nothing."

Mrs Clinton also continued to rely on her high-profile political surrogates. President Barack Obama made two campaign stops for her in the key battleground state of North Carolina, warning supporters that Mr Trump was within touching distance of a win.

Thus far, Mrs Clinton has struggled to receive the same level of support among African-Americans as Mr Obama did during his two elections. She is hoping the President can boost enthusiasm and will even close her campaign alongside the President and First Lady in Pennsylvania tomorrow. Mr Trump will finish in New Hampshire.

Both have planned victory parties in New York on election night, even as the federal authorities warned of unspecific threats to the city from Al-Qaeda militants.

And in a fitting reflection of the election so far, scandals continued to emerge for both sides.

On Friday, two top allies of New Jersey Governor Chris Christie were found guilty for their role in a move to cause traffic problems for a town whose mayor failed to endorse the governor. Mr Christie is currently leading Mr Trump's transition team and is expected to be in the Cabinet of a Trump White House. There were also reports that Mr Trump's wife Melania violated immigration laws by modelling in the United States before receiving permission to work, and a story about a tabloid paying US$150,000 (S$207,560) to a former Playboy playmate to secure an exclusive story about her affair with the tycoon, in order to suppress it.

As for Mrs Clinton, a Reuters report confirmed that the Clinton Foundation received a US$1 million donation from the government of Qatar in 2011 that was not disclosed to the State Department. Separately, a batch of e-mails released by the State Department showed that Mrs Clinton sent her daughter information that is now deemed classified.