Ms Daniels, whose real name is Stephanie Clifford, claimed on Monday (March 26) that she was defamed by a statement Mr Trump's lawyer issued last month that made her sound like a liar.

In a Feb 13 statement, Mr Michael Cohen said, "Just because something isn't true doesn't mean that it can't cause you harm or damage" in connection with the US$130,000 (S$170,102.40) he paid Ms Clifford in 2016 to keep quiet about the alleged relationship with Mr Trump.

According to Ms Clifford, the statement harmed her reputation and exposed her to contempt, ridicule and shame.

The filing in California federal court followed a 60 Minutes interview aired on Sunday night in which Ms Clifford described the encounter she had with Mr Trump more than 10 years ago.

Mr Raj Shah, a spokesman for the White House, said on Monday that Mr Trump strongly, clearly and consistently denied the underlying claims.

"The President doesn't believe any of the claims Ms Daniels made in the interview last night were accurate," Mr Shah said. 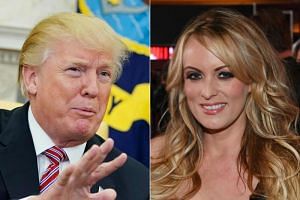 Stormy Daniels faces US$20 million in damages in Trump lawsuit

The remarks represent the White House's most substantial statement on the alleged affair.

The television interview was the first time Ms Clifford explicitly confirmed the affair since receiving a US$130,000 payment from Mr Cohen shortly before the 2016 election in exchange for a non-disclosure agreement. The Wall Street Journal first reported the payment.

The interview drew the highest ratings in 10 years for CBS's 60 Minutes, attracting 21.3 million viewers, according to Nielsen ratings released by the network.

Asked about the payment by Mr Cohen, Mr Shah said: "False charges are settled out of court all the time. This is nothing out of the ordinary."

Ms Clifford has sought to invalidate the agreement, in part because she says Mr Trump didn't sign it, and said her decision to speak out was driven by suggestions by the President's associates that she made up the story.

Ms Clifford's sometimes-graphic retelling of the alleged sexual incident largely echoed a 2011 interview with In Touch magazine about the relationship.

In Touch didn't publish the interview after Mr Cohen threatened to sue the publication, 60 Minutes reported.

She also said she had been intimidated to keep silent. Ms Clifford said that in 2011, after Mr Cohen's threat to sue In Touch, an unidentified man approached her in a parking lot before a gym class in Las Vegas and said it would be a shame for her daughter if something happened to Ms Clifford.

Mr Trump's representatives denied allegations of an affair during the presidential campaign, and earlier this year, Ms Daniels signed a statement denying any relationship, which was released by Mr Cohen.

The White House has largely avoided commenting on the allegations, but previously broadly condemned violent threats when asked about the alleged intimidation.

In the 60 Minutes interview, Ms Clifford said she signed the denial because she believed Mr Cohen would make her "life hell in many different ways".

Ms Stephanie Grisham, a spokesman for first lady Melania Trump, appeared to allude to the allegations in a tweet on Sunday night.

"While I know the media is enjoying speculation and salacious gossip, I'd like to remind people there's a minor child who's name should be kept out of news stories when at all possible," she wrote.

The alleged affair between the future president and Ms Clifford occurred only months after the birth of Barron Trump, his youngest son.

The President himself tweeted on Monday morning that there was "so much fake news", but it was unclear if he was referring to the 60 Minutes story.

Ms Clifford herself declined to answer questions about whether she had any text messages or videos documenting the relationship.

"We're not going to get into the details of everything we have at this time, and there's a reason for that," Mr Avenatti told NBC News. "We understand the American people want all the information right now, immediately. It would make no sense for us to play our hand as to this issue and we're not going to do it right now."

In a separate interview with Mr Anderson Cooper that aired last week on CNN, Ms Karen McDougal, a former Playboy model, said she had a 10-month affair with Mr Trump that also began in 2006.

Ms McDougal said she was in love with Mr Trump, but broke off the relationship out of guilt over his marriage.