WASHINGTON (WASHINGTON POST) - The first candidates vying for the job to replace fired FBI Director James Comey will be interviewed on Saturday (May 13), with acting FBI director Andrew McCabe and Republican Senator John Cornyn from Texas among those who were expected to be interviewed by Attorney-General Jeff Sessions and his deputy Rod Rosenstein, according to sources.

The men are two of at least four people who will be interviewed to replace James Comey, whom President Donald Trump suddenly fired earlier this week, according to people familiar with the matter.

McCabe on Thursday contradicted the Trump White House when he called the probe into the possible Russian meddling in the US election as "a highly significant investigation" and commented that Comey still "enjoyed broad support within the FBI".

Others being considered for the role include Alice Fisher, a white-collar defence lawyer who previously led the Justice Department's criminal division, and Michael Garcia, a judge on the New York State Court of Appeals who previously served as the US attorney for the Southern District of New York. 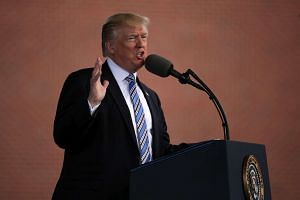 All four will be interviewed by Sessions and Rosenstein, the two top officials in the Justice Department.

The list is not a comprehensive accounting of finalists for the FBI director positions. It is possible other candidates could be considered, officials said, and the ultimate decision falls on Trump.

Justice Department officials also have interviewed four other candidates to serve as interim FBI director, though it is possible McCabe could stay on in that role if he were not selected for the permanent job.

The role requires Senate confirmation. Whoever is selected is appointed to a 10-year term, although they can be removed by the president.

Trump's sudden removal of Comey from the position this week set off a political firestorm in Washington, furling fears that the president was trying to stifle the bureau's probe into possible coordination between his campaign and Russia to influence the outcome of the 2016 election.

Trump acknowledged in an interview with NBC News published on Thursday he was thinking of the Russia controversy when he decided to fire Comey. Previously, White House officials said he was acting on the recommendation of the top Justice Department officials, particularly a memo from Rosenstein that had criticised Comey for his handling of the investigation into former secretary of state Hillary Clinton's use of a private email server.

Trump said, however, that he would have removed Comey no matter the advice from Rosenstein or Sessions.

Cornyn, 65, is a former Texas attorney general and state supreme court justice and is serving his third term in the Senate. He serves as Senate majority whip, making him the second-ranking Republican in the chamber. But GOP senators set term limits for leadership posts and his ends at the start of 2019.

Cornyn is not expected to challenge Senate Majority Leader Mitch McConnell, who is not term-limited and is widely respected among Republican senators. That means Cornyn is on the verge of hitting a professional ceiling, so the 10-year term of FBI director might be a logical next move.

If Cornyn were selected, there likely would be Democratic concern about handing over the nation's premier law enforcement agency to a Republican who - despite being considered an affable senator - has served as a prominent partisan attack dog.

Cornyn has in recent weeks become more of an outward defender of Trump. Earlier this week, he dismissed the idea that Trump fired Comey to impede the FBI's Russia probe, terming it a "phony narrative."

"If you assume that, this strikes me as a lousy way to do it," he said. "All it does is heighten the attention given to the issue."

The senator's confirmation would be assured because of Democratic rules changes in 2013 that only require a simple majority. But Democratic strategists have already put senators on notice they would hold their feet to the fire in voting against Cornyn.

Spokespeople for Cornyn did not immediately respond to emails on Friday night. Asked previously if he would be willing to serve as FBI director, Cornyn said with a smile, "I'm happy serving my state and my country in my present position."

One person familiar with Cornyn's thinking told The Washington Post that his meeting with Sessions on Saturday was not billed as an interview and instead about the "next steps" for the FBI.

Cornyn had also been scheduled to deliver a commencement address on Saturday at the Texas Southern University in Houston, but university officials on Friday cancelled his appearance at the historically black college after a petition signed by hundreds of students protesting his appearance.

The university said it had asked Cornyn to visit at a later date. The senator's office said Friday that he respected the decision and looked forward to visiting in the future.

McCabe, who had been the FBI deputy director before Comey was fired, might be a more palatable choice for Democrats. At a Senate Intelligence Committee hearing on Thursday, he heaped praise on his former boss and did not hesitate to rebut narratives advanced by the White House, including its attempt to minimise the Russia probe.

He is a longtime FBI agent who led the Washington Field Office before he was elevated to the bureau's No. 2 post in 2016.

Fisher and Garcia are both alumni of the George W. Bush administration. Garcia served as assistant secretary for Immigration and Customs Enforcement and as the US attorney for the Southern District of New York, where he led the investigation into a prostitution ring that ultimately forced New York Governor Eliot Spitzer to resign.

Fisher served as an assistant attorney general, and, if selected, would be the first woman to run the FBI.

Efforts to reach both of them were not successful Friday night.