In affluent Brecksville, south of Cleveland, Ohio, it is easy to find voters who are happy with President Donald Trump.

Retired engineer Gary Kasmer, 66, who voted for Mr Trump, is enthusiastic about the President's pro-business approach and happy with his strong leadership on foreign affairs and national security, he told The Straits Times.

Mr Raymond Schmitt, 29, single and staunchly against abortion, who works in the oil and gas industry, had reservations but now wears a red MAGA (short for Mr Trump's slogan Make America Great Again) baseball cap and said he will vote for him again in 2020.

"Things have been somewhat messy in the aftermath of a hotly contested election," he said. "But the president is working on fulfilling his promises. I honestly can't see myself voting for a Democratic candidate… so long as their entire platform runs antagonistic to the Pro-Life movement."

In an indicator of America's bitter polarisation, the national approval rating of the real estate tycoon and former reality TV celebrity CEO remains at a historic low nationally, one year into the job. But in his Republican base, while it has drifted slightly, it is still relatively robust.

The economy is doing well. The stock market is up, unemployment down. Tax cuts will keep the economy buoyant, at least short term.

After a chaotic few months at the White House, the centre of power has been more orderly since the induction of former general John Kelly as chief of staff in July. 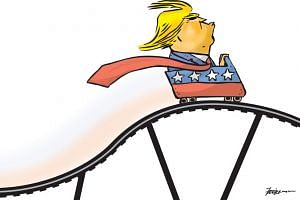 Trump's roller-coaster of a first year in office

With exceptions - the border wall and replacing Obamacare - Mr Trump has met much of his agenda. He is beefing up the military, and takes a hard line on immigration.

In the process, he has recast the idea of America at home and abroad, into what Dr Inderjeet Parmar, professor of international politics at the City, University of London, calls a "hard, coercive state".

But as Mr Trump shreds convention, his presidency is possibly the most controversial in modern American history.

A major test looms in mid-term elections to Congress in November. Loss of the Republican majority in Congress would leave him technically vulnerable to impeachment.

Democrats see an FBI investigation into alleged collusion with Russia during Mr Trump's campaign and transition as a potential silver bullet. Yet Republicans have shown no inclination to desert Mr Trump - a prerequisite for dislodging him.

Trump is utterly unpresidential by any previous standard, making no effort to reach beyond his narrow base. Previous presidents took pains to be predictable, to let the world know what the United States stood for and what it stood against. This president revels in his unpredictability.

PROFESSOR OF HISTORY H.W. BRANDS, on the President’s unprecedented approach

But domestic polarisation will probably worsen. The 71-year-old who came to power over a deeply divided nation has made little or no attempt to reach beyond his base.

Seemingly impromptu, he speaks his mind, sometimes coarsely. Weaponising patriotism, he lashes out at critics, stoking his base's resentment of political and bureaucratic elites. White supremacist groups are emboldened and Muslims left worried by his rhetoric.

"He has tried to remake American identity around the angry white male, a critique and rejection of political correctness that sums up all the felt slights against white American men of all classes by foreigners, women and minorities," Dr Parmar told The Straits Times.

Seemingly impatient with constraints on his power, Mr Trump has attacked pillars of America's system including the Department of Justice, the courts, and the media.

Abroad, he dented American credibility by withdrawing from the Trans Pacific Partnership and the Paris Climate Agreement. The North American Free Trade Agreement (Nafta) is being renegotiated.

NOT TO BE UNDERESTIMATED

Trump has made clear… that if your world is going to be disrupted, it is better to be the disruptor. Asia should not underestimate the ability of a pragmatic president like Trump, to get things done.

FORMER US AMBASSADOR CURTIS CHIN, on the President’s potential

A potentially damaging trade war with China looms within months. China has been identified in the US' National Security Strategy as a strategic competitor. The US is conducting more freedom of navigation patrols in the South China Sea - though both China and the US appear not to be making an issue of it.

"He believes in personally picking up the phone and calling leaders," a Washington based diplomat told The Straits Times. But he acknowledged: "He does want to tear up the established process."

"It's in matters of style that he is so unusual," University of Texas in Austin professor of history H.W. Brands told The Straits Times. "Trump is utterly unpresidential by any previous standard, making no effort to reach beyond his narrow base. Previous presidents took pains to be predictable, to let the world know what the United States stood for and what it stood against. This president revels in his unpredictability."

This has left America on edge and the world uneasy. "It is an uninformed unpredictability," Mr Uzair Younus, director of South Asia at consultancy Albright Stonebridge Group, told The Straits Times.

Mr Trump has torn up the diplomatic playbook.

"Trump has made clear… if your world is going to be disrupted, it is better to be the disruptor," said Mr Curtis Chin, former US ambassador to the Asian Development Bank and an inaugural Asia Fellow of the Los Angeles-based Milken Institute.

"Asia should not underestimate the ability of a pragmatic president like Trump to get things done." A version of this article appeared in the print edition of The Straits Times on January 20, 2018, with the headline 'A year on, Trump's US still deeply divided'. Subscribe
Topics:
More
Whatsapp Linkedin FB Messenger Telegram Reddit WeChat Pinterest Print Purchase Article Copy permalink