NEW YORK • Hundreds of people walked through the space between the Oculus and 3 World Trade Centre, some pausing to glance up from their phones or conversations long enough to notice a recent addition: Two undulating wooden structures, one large and one small, containing what looked like stalks of grass.

"I walk past this almost every day," said Ms Gillian Pardi, 25, a dog walker. "I noticed it a few weeks ago, and I keep seeing the little sprouts getting taller and taller."

But these are not mere sprouts or stalks of grass. They are rice plants.

The temporary rice paddy installation is the creation of Ms Danielle Chang, Taiwanese-American founder of LuckyRice, a lifestyle brand, and the non-profit Lucky Chow, both of which promote Asian culture through a culinary lens.

Signs around the planters explain that rice provides more than one-fifth of the calories consumed worldwide by humans; that there are more than 120,000 varieties of rice grown globally; and that rice was used instead of mortar during part of the building of the Great Wall of China.

"When I thought about creating a public art installation in New York, which is something I've always wanted to do, I thought it would just be really disruptive to be able to plant a rice paddy right in the heart of New York City," said Ms Chang, who has a background in art history and art curation.

And she said it is not a coincidence that the paddy is across from the 9/11 Memorial and Museum in Ground Zero. 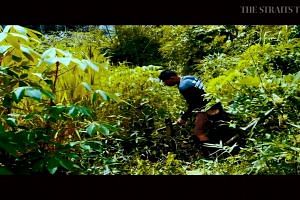 As Asians get rich and healthy, 'smart crops' replace rice on future menus

Your bowl of rice is hurting the climate too

"We wanted to create something that amplified renewal through remembrance," Ms Chang said.

"And then you can talk about urban farming and issues of sustainability and responsible growing, climate change and how we're going to feed the world - because rice really is the grain that feeds the world."

Ms Chang partnered the Port Authority to plant the rice, which will continue to grow through to Sept 26, when it will be harvested for a feast atop 3 World Trade Centre.

Mr Nick Storrs, a farmer who has grown several varieties of rice on Randalls Island for years, was hired to oversee the project. Mr Storrs enjoys working with rice in particular because while Americans consume plenty of rice, many have not actually seen it growing. "It's just food that comes in a 5-pound (2.27kg) bag," he explained.

In April, Mr Storrs started working with City-As-School, a public high school in the West Village, to plant Japanese, Uzbek, Italian, Madagascan and American rice seedlings in the school's greenhouse and hydroponic lab.

Seventeen-year-old Keyera McLaurin served as the project manager. She had never seen rice growing before.

"I actually learnt that, you know, stuff that we eat really takes nurturing," she said.

Throughout the spring, she checked on the seedlings daily. Then, in June, she and her classmates helped transplant the seedlings downtown, where residents, professionals and tourists in the area started to take notice.

Mr Nick Fabiano, 24, and Ms Colleen Gates, 25, colleagues who work inside 3 World Trade Centre, have been watching the paddy develop this summer.

"I know rice is grown in paddies underwater; I've seen pictures online," said Mr Fabiano, who, when he first walked by the installation, did not know what he was looking at until he read the sign.

"I eat rice five out of seven days; it's one of my staples," Ms Gates said. "It's so cool to watch; it's already grown so much from when they put it up a month ago."

Reactions like these are exactly what Ms Chang and Mr Storrs were hoping for. "I really like the idea of breaking rice from this role as a commodity," Mr Storrs said.

Of course, there are some people who know exactly what they are looking at.

Lee Kong-min, 10, who was visiting New York with his parents from South Korea, had no trouble identifying the plant. Although he did not expect to see it on his trip to New York City.