NEW YORK (NYTIMES) - In a development that transforms the fight against Ebola, two experimental treatments are working so well that they will now be offered to all patients in the Democratic Republic of Congo, scientists announced Monday (Aug 12).

The antibody-based treatments are so powerful - "Now we can say that 90 per cent can come out of treatment cured," one scientist said - that they raise hopes that the disastrous epidemic in eastern Congo can soon be stopped and future outbreaks more easily contained.

Offering patients a real cure "may contribute to them feeling more comfortable about seeking care early," said Dr Anthony Fauci, director of the National Institute of Allergy and Infectious Diseases, who joined the World Health Organisation (WHO) and the Congolese government in making the announcement.

That prospect should greatly lessen the aura of terror that surrounds Ebola, a hemorrhagic fever virus whose reputation has been shaped by its deadliness and its incurability.

Since its discovery 40 years ago, the virus has haunted Africa. Until now, many believed that anyone catching Ebola was doomed to be die alone among space-suited strangers and to be buried without ceremony in a bleach-misted body bag.

Fear of the virus and mistrust of health workers have been major obstacles to combating Ebola's spread in eastern Congo, where terrified families often hide their sick and even attack health teams.

If word spreads that a cure exists, people may begin to summon help early in the disease's progress, which would be crucial to saving lives and preventing further spread.

"The more we can learn about these two treatments, the closer we can get from turning Ebola from a terrifying disease to one that is preventable and treatable," said Dr Jeremy Farrar, director of the Wellcome Trust and a co-chair of a WHO committee evaluating Ebola therapeutics. 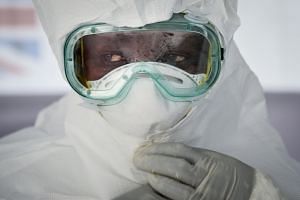 WHO declares global health emergency over Ebola outbreak in Congo

The epidemic, which was declared a public health emergency last month, has now infected about 2,800 known patients, killing more than 1,800 of them, according to the WHO.

The new experimental treatments, known as REGN-EB3 and mAb-114, are both cocktails of monoclonal antibodies that are infused intravenously into the blood.

REGN-EB3 is made by Regeneron Pharmaceuticals of Tarrytown, New York, which also makes other antibody treatments. Fauci's institute, which is part of the National Institutes of Health, developed mAb114 and licensed production last year to Ridgeback Biotherapeutics, a Miami company.

Antibodies are Y-shaped proteins normally made by the immune system that clump onto the outer shells of viral particles, preventing them from entering cells. The two new treatments are synthetic versions grown under laboratory conditions.

The two new therapies were among four that were tested in a trial that has enrolled almost 700 patients since November. The two worked so well that a committee meeting Friday to look at preliminary results in the first 499 patients immediately recommended that the other two treatments - ZMapp, made by Mapp Biopharmaceutical, and remdesivir, made by Gilead Sciences - be stopped. All patients will now be offered either the Regeneron or the Biotherapeutics drug.

The death rate among untreated and unvaccinated patients in this outbreak is thought to be over 70 per cent, said Dr Michael Ryan, director of emergency response for the WHO.

The difference in mortality rates between the Regeneron product and the Ridgeback one was considered too small to be statistically significant, so both are still being used, Dr Fauci said.

Regeneron and Ridgeback have said they can make enough doses to treat all patients, Dr Fauci said. It is helpful to have two options in case supply problems develop with one drug or the other, said Dr Michael Ryan, the WHO's chief of emergency response.

Psychologically, Dr Muyembe said, news of a cure could change the course of this outbreak, which is the worst of the 10 that Congo has endured.

Residents of eastern Congo, many of them traumatised refugees from wars and genocides in the region, are deeply distrustful of the government in the capital, Kinshasa. Rumours have spread that Ebola does not exist, or that treatment teams steal blood and body parts for witchcraft. Treatment centres have been shot up or burned down.

"Now we can say that 90 per cent can come out of treatment cured, they will start believing it and developing trust," Dr Muyembe said. "The first ones to transmit this information will be the patients themselves."

Dr Muyembe, 77, whom Dr Fauci referred to as a "true hero," has been fighting Ebola since it first appeared in what was then Zaire in 1976.

Decades ago, he pioneered the use of survivors' blood serum - which contains antibodies - in order to save patients. The two experiment treatments that proved successful last week descend in part from his original research.

Asked how he felt about that during a news conference, Dr Muyembe said through a translator: "I'm a little sentimental. I had this idea a long time ago, and I've waited patiently for it. I'm very happy, and I can't believe it."

The Regeneron treatment - the one with the best results - was added to the clinical trial at the last minute only after reconsideration by a WHO panel of experts, the company said.

The four treatments were tested in units run by three medical charities: Doctors Without Borders, Alima and the International Medical Corps.

To fight Ebola, deal with the fear factor

Formal testing, which began in November, was known as the PALM trial, for Pamoja Tulinde Maisha, which means "Save Lives Together" in Swahili. Patients were assigned at random to get one of the four treatments.

Before that, some patients were being given whatever was available. Early testing on 113 patients released in October suggested that the treatments could substantially cut mortality rates if given early, but there was not enough data to tell which ones were working the best.

Development of the new treatments was supported by the Biomedical Advanced Research and Development Authority, a division of the US Department of Health and Human Services concerned with fighting chemical, biological, radiological and nuclear threats, and pandemic diseases.

A spokeswoman for Regeneron said the company had "not considered pricing yet" but was currently offering the treatment for free for "compassionate use" purposes.

Despite the availability of a highly effective vaccine and hints that treatments work, the epidemic has spiraled out of control in Congo because of violence in the hot zone where the virus was entrenched.

The State Department forbade US government personnel from working on the front lines, including experts from the Centres for Disease Control and Prevention who have played vital roles in beating previous Ebola epidemics.

The response was also severely hampered by a power struggle within the Congolese government itself.

That appeared headed for resolution on July 26, when the health minister, Dr Oly Ilunga, resigned in protest over a decision by President Felix Tshisekedi to put responsibility for fighting the outbreak in the hands of a committee of experts headed by Dr Muyembe.

In April, a different committee headed by Dr Muyembe had delivered a scathing report on Dr Ilunga's handling of the epidemic and suggested many changes, including the rolling out of a second vaccine and efforts to win the trust of residents by offering food, routine medical care and vaccines against other diseases, like measles.