Former Texas congressman Beto O'Rourke dropped out of the Democratic race on Friday, after failing to convert a groundswell of support for his Senate candidacy last year into a sustained, well-funded presidential campaign.

But 17 other Democrats are still vying for their party's nomination to run against Republican President Donald Trump exactly a year from today, on Nov 3, 2020.

The historically high number of Democratic hopefuls means that the sands are still shifting as candidates strive to differentiate themselves from their many rivals on policy and personality.

For now, the battle for the nomination is being fought largely between three septuagenarian front runners: former vice-president Joe Biden, 76; Vermont Senator Bernie Sanders, 78; and Massachusetts Senator Elizabeth Warren, 70. Incidentally, Mr Trump will be 74 next year.

A RealClearPolitics average of six polls over the past two weeks puts Mr Biden with 26.7 per cent of support from primary votes, Ms Warren at 21.3 per cent and Mr Sanders at 16.8 per cent.

Mr Biden has the longest political career under his belt and was the candidate to beat from the start, but Ms Warren and Mr Sanders have narrowed the gap since April.

Their numbers shift between national and state polls, signalling a tight race at the head of the pack.

For instance, the latest poll, released on Friday, has Ms Warren ahead of Mr Biden in Iowa.

The state is where primary voters will be the first in the US to vote for their party's candidate, and the results are seen as a litmus test of how well the candidates will do nationally. The Iowa poll puts Ms Warren in the lead with 22 per cent of supporters picking her first, a whole 5 percentage points higher than Mr Biden, who comes in fourth place behind Mr Sanders and Indiana Mayor Pete Buttigieg.

But a national poll released by CNN just a week ago had Mr Biden in the lead, preferred by 34 per cent of registered Democrat voters over his next-nearest rival Ms Warren, who had 19 per cent, followed by Mr Sanders with 16 per cent.

Ideologically, Mr Biden is the most centrist and moderate of the three, and is more popular with older voters while Ms Warren and Mr Sanders, the standard-bearers for the left flank of the party, attract a younger crowd.

Mr Sanders is known for his big-ticket liberal policies, such as Medicare for All - putting all Americans on a universal health insurance scheme with no room for private players - free tuition at public colleges and college debt forgiveness. Ms Warren supports these as well.

Their main difference is that Mr Sanders describes himself as a Democratic Socialist, while Ms Warren calls, instead, for a better capitalism, frequently targeting billionaires and conglomerates in her campaign against inequality.

The Democratic field is now debating whether such policies are viable and how they will be paid for. Ms Warren vowed on Friday to not raise taxes for the middle class but to hike taxes on giant corporations and the richest Americans. Looming over Mr Sanders is the heart attack he suffered early last month, which has raised questions of whether he has the physical stamina for the job.

Mr Biden and his son Hunter have been repeatedly attacked by Mr Trump, who alleged without evidence that Hunter had been involved in graft in Ukraine and China. Mr Trump's efforts to get Ukrainian officials to investigate the allegations are at the centre of an ongoing impeachment inquiry.

A little way behind the top three, Mr Buttigieg stands out for his fiery debate performances, impressive curriculum vitae as a Harvard graduate and Afghanistan war veteran. He also presents himself as someone who can bridge the divide between left and right. 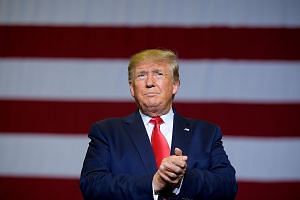 Democrats seen failing to focus on who can beat Trump

Digital threats multiply ahead of 2020 US elections

Ms Harris axed staff last week in a restructuring of her campaign to focus on Iowa, while Mr Yang and Mr Booker poll in the single digits. Ms Gabbard and Mr Castro have not yet met the polling and donor requirements to qualify for the November debate.

Still, it is remarkable how many are in the race. The cohort is historically the largest in recent years, according to a New York Times analysis of presidential races of both parties since 1972.

Republicans had about the same number running against an incumbent Barack Obama a year before the 2012 election.

The unsettled field also means the Democratic candidates have not yet consolidated against Mr Trump. This is most obvious at the televised debates, during which the hopefuls attack their opponents' policy positions.