Investigators in Orange County believe there could be many additional victims, based on finding hundreds of videos of women who appear to be highly intoxicated on a phone belonging to one of the suspects, Grant Robicheaux.

Since the charges against Robicheaux, 38, and his girlfriend, Cerissa Riley, 31, were announced on Tuesday, at least 12 women have told the Orange County district attorney's office that they, too, were victims, the office said on Friday (Sept 21).

At a news conference on Friday, Tony Rackauckas, the district attorney, urged women to come forward and vowed to safeguard the identities of those who did so.

Investigators believe that Robicheaux, an orthopaedic surgeon, and Riley, a teacher, targeted women while at bars, parties and festivals, including Dirtybird Campout in Silverado, California, and Burning Man in the Black Rock Desert in Nevada.

Some of the women said they had met the couple on dating apps like Tinder and Bumble.

"Women who encountered these two might have felt a false sense of security, due to the fact that both defendants are clean-cut and good looking," Rackauckas said at a news conference earlier in the week. 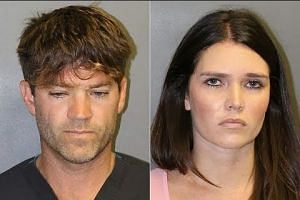 US surgeon, girlfriend charged with rape, 'hundreds' of victims possible

Robicheaux, whose practice is in Newport Beach, south of Los Angeles, appeared on an episode of the Bravo reality TV show Online Dating Rituals Of The American Male in 2014.

The alleged assaults did not take place at the clinic and did not involve drugs normally used during medical treatment, prosecutors said.

Lawyers representing the couple, Philip Cohen and Scott Borthwick, did not respond to multiple requests for comment.

In a statement to The Los Angeles Times, they said that Robicheaux and Riley both "unequivocally" denied the accusations of sexual assault.

While authorities investigate additional allegations against the couple, the charges Robicheaux and Riley face stem from two alleged assaults in 2016.