ABOARD AIR FORCE ONE • United States President Donald Trump said on Saturday that he is likely to meet North Korean leader Kim Jong Un next month or in February, and that three sites for their second meeting are under consideration.

"We are getting along very well. We have a good relationship," Mr Trump told reporters aboard Air Force One on his return from the G-20 summit in Argentina.

Mr Trump added that at some point, he will invite Mr Kim to the United States.

The two sides have been engaged in talks on the leaders' second meeting after the first, unprecedented, one in Singapore in June, Reuters reported in October, citing a senior official.

The White House said in a statement on Saturday after Mr Trump's meeting with Chinese President Xi Jinping that they and Mr Kim will strive "to see a nuclear-free Korean peninsula".

The statement said Mr Xi and Mr Trump "agreed that great progress has been made with respect to North Korea". 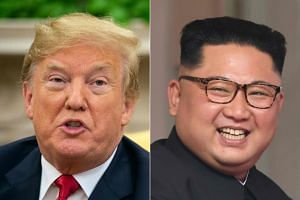 Trump signals possible trade deal with China; 'in no rush' but will meet Kim Jong Un in early 2019

Mr Pence told NBC News that the US would not require Pyongyang to provide a complete list of nuclear weapons and locations before the second summit, but that the meeting must produce a concrete plan.

"I think it will be absolutely imperative in this next summit that we come away with a plan for identifying all of the weapons in question, identifying all the development sites, allowing for inspections of the sites and the plan for dismantling nuclear weapons," Mr Pence had said.

It was essential that the pressure of international sanctions be maintained on North Korea until its complete denuclearisation was achieved, he had added.

A version of this article appeared in the print edition of The Straits Times on December 03, 2018, with the headline 'Trump says meeting with Kim likely in Jan or Feb'. Subscribe
Topics:
More
Whatsapp Linkedin FB Messenger Telegram Reddit WeChat Pinterest Print Copy permalink