DANANG, Vietnam (AFP) - The United States and Russia issued a presidential joint statement saying there was "no military solution" to the war in Syria after their leaders met briefly on the sidelines of a regional summit in Vietnam.

There had been mixed messages for days from both Moscow and the White House on whether President Donald Trump and his Russian counterpart Vladimir Putin would hold face-to-face discussions during the Apec summit in Danang.

The pair were seen sharing cordial handshakes and brief conversations three times during the summit but there were no sit-down talks between the two.

The statement, issued by officials from both sides, said the two presidents had made progress on Syria, which has been battered by six years of civil war.

The US and Russia have backed competing factions in the bloody conflict, and agreement between them on the next steps towards peace is rare.

"The presidents agreed that there is no military solution to the conflict in Syria," the statement said, adding that the two sides "confirmed their determination to defeat ISIS" - an alternative name for the Islamic State of Iraq and Syria group.

The statement added that the two sides had agreed to keep military channels open to avoid potential clashes over Syria and urged the warring sides to participate in UN-led peace talks in Geneva. 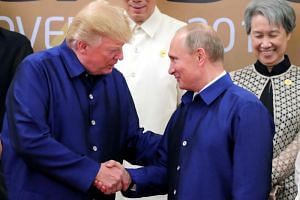 Russia has run a major bombing campaign in Syria since 2015, when it stepped in to support President Bashar al-Assad's fight against rebels - some of them US-backed - tipping the conflict in his favour.

The Russian military has recently accused the United States of merely "pretending" to fight IS in Iraq and of hindering the Russian-backed offensive in eastern Syria.

But Saturday's joint statement "expressed satisfaction" with efforts to prevent incidents between their respective forces in Syria.

Trump's relationship with Moscow has haunted the first year of his presidency, with key former aides under a US investigation for alleged collaboration with the Kremlin.

Putin and Trump last held face-to-face talks at a G20 summit earlier in the year, and there was intense speculation over whether they would so do again in Danang.

After the pair met on the sidelines of the APEC summit, Trump said he believes Putin was sincere when he denied meddling in the US election that propelled Trump to power, adding that the Russian leader felt "very insulted" by the allegations.

Overly amicable talks between Trump and Putin in Vietnam risked being an awkward sell for the White House as it vigorously denies any undue links with the Kremlin.