Eleven countries in an ambitious free trade deal, including Singapore, have agreed to go ahead without the United States after a week of drama when agreement seemed elusive.

They will stick to the core elements of the Trans-Pacific Partnership (TPP) agreed upon two years ago, but which the United States pulled out of in January.

The deal substantially lowers tariffs on a wide range of goods and, even without the US, remains attractive, although some had sought to weaken its onerous standards.

For Singapore companies, it offers access to a market of 500 million people with a combined output of US$10 trillion (S$13.6 trillion).

The new pact - the Comprehensive and Progressive Agreement for the TPP (CPTPP) - suspends 20 provisions of the original TPP, mostly on intellectual property.

It is good that the countries have come this far. It is not quite settled yet, because you do not have a legal text. It has not yet been signed but the important parts have all been settled. That is something we are happy with and I hope we are able to take it forward.

PRIME MINISTER LEE HSIEN LOONG , on the progress of talks on the free trade deal.

It was reached on the sidelines of the annual leaders' meetings of the Asia-Pacific Economic Cooperation (Apec), a grouping of 21 economies set up to liberalise trade across the region. All the TPP countries are members of Apec.

Speaking to Singapore reporters after the Apec Summit ended, Prime Minister Lee Hsien Loong said it took "a lot of skill and determination and willingness" among the 11 parties to agree not to renegotiate the pact, even though the circumstances have changed.

The deal appeared to hit a major roadblock on Friday when a planned meeting of TPP leaders was shelved as Canadian PM Justin Trudeau did not attend. His Trade Minister Francois-Philippe Champagne later put this down to "a misunderstanding about the schedule".

Business groups cheered the deal, including the Singapore Business Federation, whose chief executive officer Ho Meng Kit said he "looked forward to the speedy conclusion and subsequent implementation of the restructured agreement". 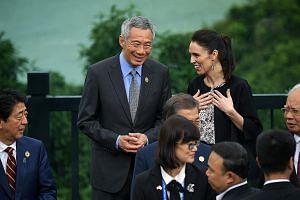 Against all odds, a breakthrough for TPP deal

The Asian Trade Centre executive director, Dr Deborah Elms, told AFP that even without the US, the CPTPP was "the most important trade agreement signed in the last 20 years". "Companies had largely given up on the TPP after the withdrawal of the United States," she said. "Now, firms will need to scramble to figure out how the agreement matters to their business."

Ever since US President Donald Trump withdrew the US from the TPP in one of his administration's first acts in January, Japan - the next-biggest economy in the group - has taken the lead in negotiations.

Chinese Foreign Ministry official Zhang Jun told reporters in Danang yesterday that the CPTPP would not impact the RCEP's prospects.

RCEP members held a 20th round of talks in Incheon last month and their leaders will meet at the Asean summit in Manila on Tuesday to review their progress.

A version of this article appeared in the print edition of The Sunday Times on November 12, 2017, with the headline 'TPP deal moves ahead without US'. Subscribe
Topics:
More
Whatsapp Linkedin FB Messenger Telegram Reddit WeChat Pinterest Print Purchase Article Copy permalink