Ministers took charge of delegations yesterday at United Nations-led climate talks in Paris to hammer out the final remaining issues blocking a global deal to save the planet from crippling weather extremes, rising seas and air pollution.

Negotiators completed a draft text of the Paris agreement, or Paris Outcome, last Saturday and handed it to the French government, which is hosting the talks. The draft is still filled with options and bracketed text that represents different country positions. Ministers must now conduct tough political negotiations on disputed areas to bring the deal home by the end of the week.

Minister for Foreign Affairs Vivian Balakrishnan and Minister for the Environment and Water Resources Masagos Zulkifli are in Paris assisting with the negotiations.

US President Barack Obama has sent Secretary of State John Kerry to try to forge a deal that Mr Obama hopes will cement his legacy on climate change and the environment.

In a stark message to ministers yesterday, UN Secretary-General Ban Ki Moon said the "clock is ticking towards climate catastrophe".

Outside these negotiating halls, there is a rising global tide of support for a strong, universal agreement.

"Outside these negotiating halls, there is a rising global tide of support for a strong, universal agreement," he said.

But in a sign of the tough negotiations ahead, Indian Minister of Environment, Forest and Climate Change Prakash Javadekar said: "Substance-wise, we are not midway but... at a crossroads", Reuters reported.

The French have formed a Paris Committee and appointed 14 co-facilitators to tackle the more contentious issues in a bid to forge consensus. The issues include the ambition of the pact, such as long-term goals and periodic review; accelerating actions after the Paris agreement begins in 2020; and the differentiation between rich and poor nations on finance, carbon cuts and transparency of nations' climate actions.

A number of developing countries want an accounting system that differentiates them from rich nations, saying they lack the technical capacity and need assistance for reporting, measuring and verifying actions that cut greenhouse gas emissions, particularly carbon dioxide, the main greenhouse gas. 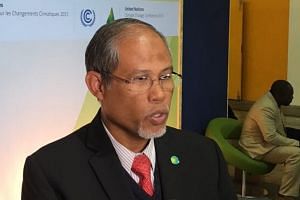 The draft text also has options that call for wealthier states to take the lead in emissions cuts, while developing countries should undertake "diversified enhanced mitigation actions/efforts".

Plant a tree and save the world from climate change

There is growing pressure for climate finance for poorer nations to come not just from rich nations but also from wealthier developing nations to share the burden of providing funds to the countries most vulnerable to climate change.

To seal a deal, poorer nations insist there should be a deep pool of funds available from 2020 to help them green their economies and pay for measures to adapt to climate change impacts, such as higher sea levels, more intense rainfall and longer droughts that threaten crops.

Without a deal on finance, the talks could falter, some developing countries and non-government organisations say.

In a reminder of the threat from industrial and transport emissions, Beijing issued its first ever "red alert" on air pollution yesterday, joining the Indian capital New Delhi in the battle against toxic smog.

A version of this article appeared in the print edition of The Straits Times on December 08, 2015, with the headline 'Tough negotiations ahead with climate talks at crossroads'. Subscribe
Topics:
More
Whatsapp Linkedin FB Messenger Telegram Reddit WeChat Pinterest Print Purchase Article Copy permalink