This is what the world's biggest refugee camp looks like, from end to end. The Sunday Times artist Pradip Kumar Sikdar accompanied Associate Editor Rahul Pathak and executive photojournalist Kua Chee Siong to cover the Rohingya crisis, and captures what a photograph can't in this inkwash drawing - the sheer scale of the camps across the rolling hills of Kutupalong in Bangladesh, near the border with Myanmar. Tens of thousands of makeshift tents made of tarpaulin, rope and bamboo cover an area the size of Sengkang at 12 sq km. Crowded into this megacamp are more than 600,000 people who have fled rape and massacre in their homeland in Myanmar. Another 300,000 have been placed in other camps. 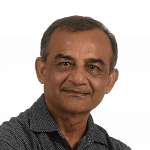 Planning the visit to the Rohingya camps in Bangladesh, The Sunday Times decided to rope in art director Pradip Kumar Sikdar. Not only is he a brilliant artist whose perspective of the sprawling camps would give readers a sense of scale beyond the scope of any camera, we figured, but he also speaks fluent Bengali, the language of Bangladesh and, presumably, the Rohingya.

When we reached Bangladesh's capital, Dhaka, on our way to Cox's Bazar and met local journalists, this supposition went out the window. The average Bengali cannot understand the Rohingya dialect, we were told by a reporter who had made several trips to the camps.

His other advice was more practical: Buy rain-proof shoes and gamchha, a local Bangladeshi cotton towel, to shield your head from the sun.

Some international journalist friends gave us contacts of local "fixers" who would translate for us and arrange to show us around the camps.

Fortunately, we met the editor of a Bengali newspaper who put us in touch with his stringer - a freelance journalist - at Cox's Bazar.

This stringer did not speak English well, but he spoke the Rohingya dialect and Bengali. Pradip spoke Bengali, but not the Rohingya dialect. Each question went through a three-step translation process. I would ask it in English, Pradip would translate that to Bengali and the stringer, in turn, conveyed the question to the Rohingya people in their dialect. The answer would come back through the same route.

FROM TOURIST BEACH TO CAMP OF DESPAIR

The drive from the hotel in Cox's Bazar to the camps was a tale of two halves. It would start along a beautiful road called Marine Drive - a road that flanks the gorgeous, unbroken 120km Cox's Bazar beach that is the longest in the world - before veering into the narrow path to Ukhiya, where some of the camps are based. There the car would slow to a crawl behind the vehicles transporting officials and volunteers on roads that were never made to bear so much traffic. Eventually, the 42km drive would take between two and 21/2 hours.

More On This Topic
Read: Special report on Rohingya refugees in Bangladesh

Though The Sunday Times team had read about the camps and seen pictures beforehand, when we eventually drew up before Kutupalong camp for the first time, it shook the senses. The size, the smell - and the sorrow - got to us and we nearly threw up.

It had rained earlier that day and the mudpath kept dissolving beneath our feet. But the sun was beating down and etched a darker shade on our faces. We walked six or seven hours that day, stopping to talk to grim men and giggly children.

Speaking to rape victims was gut-wrenching. Each would start speaking in a composed manner, then tears would start to well until eventually they were sobbing and speaking at the same time. But each insisted on telling her tale, without shame. For there was nothing that they had done wrong.

Every morning during our five-day stay in Cox's Bazar, we'd leave the hotel at 9am after breakfast and make our way back around 9pm.

Most people spoke candidly. Some asked for money to speak and introduce us to others; US$100 (S$137) a day was the going rate, they said. We politely refused.

At one camp, the community leader - they are called majhees - arranged for us to speak to some people. There was no talk of money. We spoke to some women and children and to the majhee himself.

Barely had he finished speaking when a burly man barged in and started slamming the majhee's face to the ground. "This majhee is making money off us," he said. The majhee then used a phone to call his own men. We left.

Each evening we'd return to the hotel hungry, our backs hurting, complaining about traffic.

Then we would think of the widows we had met, the orphans still smiling, the victims of rape and hunger - and feel ashamed of ourselves.

A version of this article appeared in the print edition of The Sunday Times on August 12, 2018, with the headline The story behind the story of Rohingya refugee camps. Subscribe