BANGKOK • The Thai government has instructed the governors of all northern provinces to prepare to evacuate residents as water levels in the Mekong River continue to rise.

The Mekong burst its banks before noon on Tuesday, and overflowed into riverside areas in the north-east Mukdahan province.

At the province's Indochina Market, hundreds of shops moved their goods to higher ground.

Mr Paithoon said: "Aside from the monsoon floods, water discharged from Nam Ngum 5 Dam in Laos into Nong Khai province has also increased the water mass in the river, and because of this, we had to declare the districts of Muang and Dong Luang as flood disaster zones."

Colonel Boonsin Padklang, who is the commander of the military peace-keeping force in Mukdahan, has deployed soldiers to help flood victims. Military trucks have been sent to flood-stricken areas to move residents out and into higher ground.

Meanwhile, the Disaster Prevention and Mitigation Department on Tuesday warned that 20 northern provinces are at risk of flooding due to high cumulative rainfall. 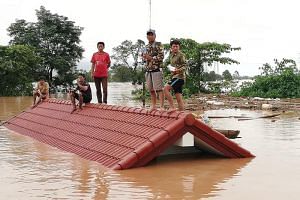 Chiang Rai and the six north-eastern provinces of Mukdahan, Nakhon Phanom, Sakon Nakhon, Yasothon, Roi Et and Ubon Ratchathani are seen as being especially prone to flash floods as a result of continuous heavy rainfall in northern and central Laos.

Officials said the water level has risen an average of 40cm to 50cm each day.

On Monday, an officer from the national power utility agency said the Vajiralongkorn Dam in Kanchanaburi province was at 78 per cent capacity - its highest level in 34 years.

Flooding usually peaks at around October. Thailand's last mega flood was in Bangkok in 2011, and caused billions of dollars in damage.