WASHINGTON • Taiwan President Tsai Ing-wen has said the US was responding positively to the island's requests for new arms sales to bolster its defences in the face of growing pressure from China.

Speaking on Wednesday during a stopover in Hawaii at the end of a Pacific tour, Ms Tsai told Washington's Heritage Foundation think-tank via video link that Taiwan had submitted new requests to the United States for M-1 Abrams tanks and F-16V fighter jets.

These, she said, "would greatly enhance our land and air capabilities, strengthen military morale and show to the world the US commitment to Taiwan's defence".

The US has no formal ties with Taiwan but is bound by law to help provide it with the means to defend itself and is its main source of arms.

Ms Tsai said mounting pressure from China for Taiwan to accept a "one country, two systems model" and its attempts to alter the cross-strait status quo underscored the need for Taiwan to "increase our self-defence and deterrence capabilities".

"Fortunately... Taiwan does not stand alone," she said."The United States' commitment to Taiwan is stronger than ever."

Ms Tsai said she felt the process of US arms sales to Taiwan had become less politicised, adding: "We are able to have frank discussions with the US on the right equipment for Taiwan's defence and the US is responding positively to our request." 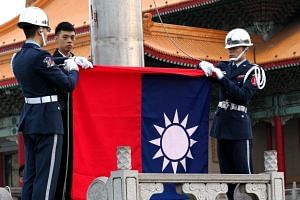 US wary of risk to Taiwan as China's military might grows

She said big-ticket defence items would be managed though a special budget and Taiwan's regular defence budget would "increase based on challenges coming across the strait".

Few issues irk China more than US military support for Taiwan, which Beijing considers a province and reserves the right to take by force.

The democratically run island has found a receptive audience inside US President Donald Trump's White House, with some officials advocating sending more warships through the Taiwan Strait, one current administration official and a former one had told Bloomberg in October.

Speaking in Beijing, Chinese Defence Ministry spokesman Wu Qian said yesterday China opposed any arms sales to Taiwan, and that it would not brook any interference in what China views as an internal matter.

"Any words or actions that damage the 'one China' principle is tantamount to shaking the foundations of Sino-US ties, is inconsistent with the fundamental interests of China and the United States, and is extremely dangerous," Mr Wu told reporters.