The full moon on Nov 14 will be the biggest since 1948, say scientists.

It will also be the closest and brightest supermoon in 2016, astronomy professor Robert Berman told Space.com.

The Nov 14 moon is the closest full moon to Earth to date in the 21st century, said US space agency National Aeronautics and Space Administration (Nasa).

This makes it a "supermoon".

The "supermoon" is "a new or full moon which occurs with the moon at or near (within 90 per cent of) its closest approach to earth in a given orbit", according to renowned American professional astrologer Richard Nolle, who coined the term in 1979.

More simply, Nasa explains that it refers broadly to when the full moon is closer to our planet than average as it orbits Earth. During a supermoon, the moon comes within approximately 360,000km of the Earth. 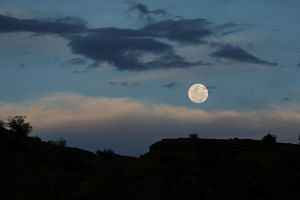 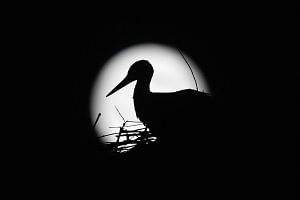 Crimson glory: All you need to know about the rare blood moon

It is a remarkable sight - a supermoon can be as much as 14 per cent bigger and 30 per cent brighter than an apogee full moon (a full moon at its furthest from Earth on its orbit).

How does a supermoon occur?

Nasa explains that the moon has an ellptical orbit, with one side (the perigee) about 48,280km closer to Earth than the other side (the apogee).

A perigee-syzygy causes the moon to appear much bigger and brighter than usual - and it is referred to as a supermoon (or technically, a perigee moon).

The Nov 14 supermoon comes in the middle of three supermoons occurring towards the end of 2016. The first was on Oct 16 and the other will be on Dec 14. What distinguishes the Nov 14 supermoon is that it becomes full within about two hours of perigee, making it brighter and bigger.

Take note however, that the viewing difference between a supermoon and a regular full moon depends largely on where you are looking at it from. If the moon is situated high above the horizon from your perspective and you have no buildings to compare it to, it may not appear larger than usual.

On the other hand, the moon can look unnaturally large and closer to the horizon when viewed through trees, buildings or other foreground objects. While this is an optical illusion, Nasa states that it does not take away from the experience.

According to ScienceAlert website, to best view the Nov 14 supermoon, you are recommended to go somewhere away from the city lights. The Nov 14 moon is expected to be at its absolute biggest at 1.52pm GMT (9.52pm Singapore time).