Impatient with the glacial pace of climate action, students from more than 80 nations plan to go on strike and skip school on Friday to urge the authorities to take more drastic action on global warming.

Ms Pamela Low from the Singapore Youth for Climate Action said there are also plans here for young people to push for greater climate action on that day.

She added that details will be revealed soon.

The Straits Times understands there will not be a strike here.

Ms Low, a 23-year-old graduate, told ST: "With climate change undermining our future, knowing that better climate policy can arrest the trend has empowered us to make our voices heard."

Mr Eric Bea, a fourth-year law student at the National University of Singapore with an interest in international environment and climate law, said civic culture in the Republic is based on consensus and not conflict.

"It would be inappropriate to adopt the same kind of actions. This is why social media has become the primary, if not the sole, source of civic engagement here, as a modernised form of grassroots engagement," added Mr Bea. 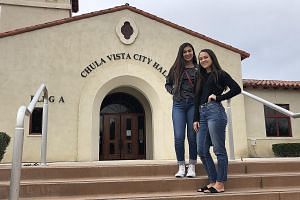 The 24-year-old said the global youth climate movement has been driven mainly by those in Western countries.

"Recent actions should also be seen in that context - that the civil society culture is based on the competition of ideas. Strikes and protests are therefore part of that system," said Mr Bea.

The number of ground-up movements in Singapore urging greater climate action has grown significantly, with many of them being led by young people.

One such example is Ms Low's movement, which urges people to dine in instead of opting for takeaways, in a bid to reduce the amount of disposables being used.

She started it in January last year.

There is also the Straw-Free Singapore movement, which was started by 17-year-old student Ang Zyn Yee to encourage individuals and businesses to give up single-use, disposable plastic straws.

Said Ms Low: "We are hopeful and committed about change. We still see hope, that's why we are fighting for it. Hence, we should put climate policy at the forefront."