WASHINGTON • The US State Department told employees they are going back to work with pay despite the partial government shutdown, as the Donald Trump administration continues to craft exemptions aimed at minimising the effects of the funding impasse with Congress.

"The department expects to be able to resume most personnel operations and fund most salaries," the department said on Thursday in the letter to its worldwide staff. For most employees, that means going back to work on Tuesday.

The department did not say where it was finding money to pay its employees. It cautioned that "bureaus and posts are expected to adhere to strict budget constraints with regard to new spending for contracts, travel and other needs".

Senator Bob Menendez, the top Democrat on the Foreign Relations Committee, said the shutdown "continues to create a real risk for US foreign policy".

"While I believe it is critically important that our diplomacy and development professionals get paid for their service to our nation, trying to hold a government together with duct tape" is "no way to govern", he said.

While visa and passport services overseas that are funded by fees have remained open, many embassy staff members around the world have been on furlough - not working and not paid - along with hundreds of thousands of government workers affected by the shutdown in the US.

In some cases, unpaid workers have been taking turns coming to offices one or two days a week to keep operations going.

22 days and counting: Government shutdown becomes longest in US history

Trump widens callback of US workers with pay to blunt shutdown 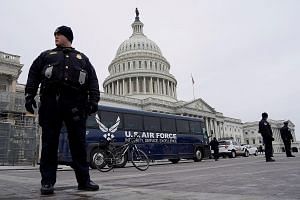 About 26 per cent of American employees of the State Department overseas and about 42 per cent stationed in the US had been furloughed, according to the department.

An increasing number of federal agencies have been calling back workers to limit the impact of the shutdown and protect favoured industries and policy initiatives.

The administration has ordered thousands of furloughed federal employees back to work without pay to inspect planes and monitor food safety, among other things.

The Federal Aviation Administration announced on Tuesday that it is bringing back some safety specialists to approve new planes for service, review plane maintenance and conduct airport inspections.

That came a day after the Food and Drug Administration said it was recalling workers to resume inspections of high-risk fare such as soft cheeses and seafood.

A version of this article appeared in the print edition of The Straits Times on January 19, 2019, with the headline 'State Dept recalling its staff with pay'. Subscribe
Topics:
More
Whatsapp Linkedin FB Messenger Telegram Reddit WeChat Pinterest Print Copy permalink