The letters sent by the US Federal Trade Commission to 21 people with large Instagram followings represent an escalation of the agency's interest in so-called social media "influencers."

Instagram, which is owned by Facebook Inc, has seen a sharp increase in recent years in promotions of products and services by famous people, often without disclosures of whether there was an endorsement deal.

Celebrities have talked up clothing brands, food, alcohol, spa treatments and a wide array of other items.

The letters demand responses to the FTC by Sept 30 on whether the celebrities had any "material connection" to marketers whose wares they promoted on the app. The letters were sent on Sept 6.

Reuters obtained copies of the letters after filing a Freedom of Information Act request with the government.

In May, the agency released dozens of letters it had sent to companies and stars giving them notice that they must tell fans about compensation for promotions on social media.

Those are known within the agency as educational letters, whereas the recent ones are known as warning letters.

For repeat offenders, the FTC could seek to impose fines.

In Campbell's case, the FTC said an Instagram post of hers that showed three suitcases made by Globe-Trotter had "recently come to our attention."

The post had no disclosure about compensation, according to the letter. If Campbell had a marketing deal, then she should tell the FTC what actions she is or will be taking to ensure disclosure, the letter says.

Instagram has tried to make it easier for people to label posts as paid promotions. In June, it said it would begin allowing people who are posting a picture to add a "paid partnership with" label that would appear above the picture.

In the United Kingdom, influencers have had to identify advertisements with the hashtags "#ad" or "#spon" (sponsored) since 2014, The Guardian reported on Saturday (Sept 16).

In April, makeup blogger Sheikhbeauty breached the UK's Advertising Standards Authority's regulations for non-broadcast advertisements as she did not clearly label a post about a herbal detox tea brand as an advertisement. 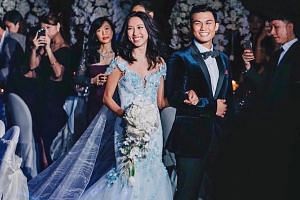 Sponsored weddings are on the rise but should guests still pay the hongbao price?

Just this week, the ASA ordered reality TV personality Sophie Kasaei to remove her own photo of the Flat Tummy Tea she had shared with her 1 million-plus followers in March, finding that it flouted rules for marketing containing nutrition or health claims.