US, China leaders set 90-day truce for officials to tackle differences and agree on trade terms

A global sigh of relief has greeted a temporary, 90-day truce between China and the US in their trade war after a meeting between President Donald Trump and President Xi Jinping in Buenos Aires.

Over a 2½-hour dinner meeting on Saturday, the two leaders set a 90-day window for negotiators to address differences and agree on terms of trade and market access.

President Trump agreed to hold off on new tariffs, and President Xi agreed to increase China's purchases of American products.

However, all eyes will now be on the negotiations because if they fail, the US' planned 25 per cent additional tariffs on Chinese goods, due to kick in earlier on Jan 1, will go ahead.

But the atmosphere at the dinner was good. It went over the allotted time, and ended with a round of applause from those in the room, observers said.

"This was an amazing and pro-ductive meeting with unlimited possibilities for both the United States and China," President Trump said in a statement as he flew back to the US on Air Force One. "It is my great honour to be working with President Xi." 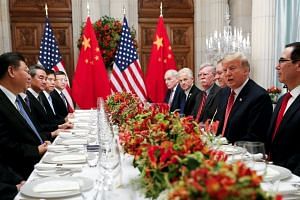 It added that Beijing was com-mitted to deepening its economic reforms and opening its markets, a process which would address economic and trade issues raised by Washington.

"Meanwhile, the US side will actively address China's concerns on economic and trade issues," wrote Xinhua.

A statement from White House press secretary Sarah Sanders said President Trump had agreed that on Jan 1 next year, he would leave the tariffs on US$200 billion (S$275 billion) worth of products at the 10 per cent rate, and not raise them to 25 per cent.

"China will agree to purchase a not yet agreed upon, but very substantial, amount of agricultural, energy, industrial and other products from the United States to reduce the trade imbalance between our two countries," it added.

Chinese Foreign Minister Wang Yi said the atmosphere at the meeting was friendly and sincere. "Important consensus was reached... which will chart a direction for China-US relations after today," Xinhua reported him as saying.

An editorial in nationalist tabloid Global Times said the agreement has "huge potential for fair trade".

"It is hoped that the trade teams from both countries will reach as many practical agreements as possible and as quickly as possible to hasten China-US cooperation," it said.

In an additional significant development, China agreed to designate fentanyl a controlled substance - meaning people selling it to the US would be subject to the maximum penalty under the law.

Fentanyl is a powerful synthetic drug used to lace heroin and opioids, blamed for an alarming spike in overdose deaths across the US. Much of it comes from China.

American farmers see light at the end of the tunnel