BELGRADE • As the gunman drove to the two New Zealand mosques where he carried out his mass killings, a Serb nationalist song was heard playing in the background of the haunting video he broadcast live on Facebook.

Hours after 50 people were gunned down in two mosques by the Australian right-wing extremist in Christchurch, Bosnia's ambassador went on local television to express concern about the song heard in the suspected killer's video that went on to show him murder victim after victim.

It was a "Serbian nationalist song in which Radovan Karadzic's name is mentioned and called on to lead Serbs", he said, referring to the convicted war criminal who led Bosnia's Serbs during the 1992-95 war.

Karadzic will go before a United Nations court this week to hear the final verdict on his 40-year sentence for the genocide of Muslims in Srebrenica and other atrocities during the inter-ethnic conflict in Bosnia that left 100,000 dead.

According to the Bosnian diplomat, the song's lyrics also say "Turks must be killed", a term hardline Serb nationalists still routinely use to refer to Bosnian Muslims.

Though linked to the 1990s war, the song played by the 28-year-old suspect Brenton Tarrant appears to have more recently been revived as an Internet meme in the extreme-right circles he circulated in online. 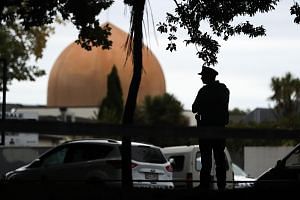 But Tarrant also connected his savage act to figures deep into Balkan history, alongside a roster of other right-wing extremists from across the globe he paid homage to in his hate-filled manifesto.

Among the historical military figures whose names were scrawled on Tarrant's weapons were several Serb nationalist icons. They were men who fought in famous battles against the Ottoman Empire's armies, such as Milos Obilic, a knight in Serb folklore, and Stefan Lazar, a 14th-century Serbian prince.

The names of two other 19th-century Balkan military leaders against the Ottomans, including Montenegrin general Marko Miljenov, were also written on the guns.

During the Ottoman Empire, the Balkans was a site of frequent contact and conflict between the Muslim and Christian worlds. That history remains a key reference point for Serb ultra-nationalists today.

According to the local authorities, Tarrant travelled to the region himself in 2016 and early 2017, passing through Montenegro, Serbia, Bosnia and Croatia, and then Bulgaria last November. He also visited Turkey.

In Sarajevo, the Islamic Community of Bosnia said it was alarmed that the "assassin started his bloody escapade to the sound of a song glorifying war crimes in Bosnia".

He "was clearly inspired by this same extremist ideology and hatred" of the 1990s, the group added.

The shooter's Balkan references also aroused bad memories in Kosovo, a mostly Muslim and ethnic-Albanian former Serbian province that broke away in a 1998-99 guerilla war. Some 13,000, mostly Albanians, were killed in the conflict.

Officials in Serbia and Bosnia, whose Serb community is semi-autonomous, have been quick to denounce the finger-pointing.

Bosnia's ethnic Serb Foreign Minister Igor Crnadak condemned the "anti-Serb hysteria" he felt had seized the region after the Christchurch massacres. "It is dangerous and irresponsible to establish a link between the crazy actions of a disturbed and sick person and an entire people," he said in a statement.